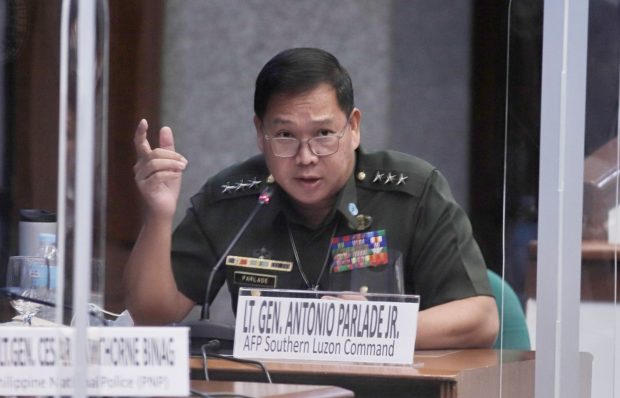 (To say that we should revive peace talks with the CPP is big nonsense.)

But Senator Francis Pangilinan called Parlade out on his language and said it was unparliamentary.

Before this, Pangilinan highlighted the urgency and importance of “aggressive” peace talks in spurring economic development.

“The economic development in Cagayan de Oro in General Santos, in Davao City, in the early up to the mid-90s was precisely because of these aggressive peace negotiations,” Pangilinan said.

“If we pursue continuing aggressive peace negotiations, there would be a second or third wave of economic development in these areas,” he added.

“Until we address this issue of aggressive peace negotiations, tigil putukan [ceasefire], e palagay [I think] it’s going to be a vicious cycle and we will not be able to duplicate that window of economic investments undertaken because of the aggressiveness of peace negotiations in the mid-90s,” he further said.

The military official said that under the Comprehensive Agreement on Social Economic Reforms (Caser), there is no “demobilization” for the CPP’s armed wing.

(We see the direction of these peace talks. The Armed Forces will be demobilized, only engineering brigades will remain to help the NPA in rural and infrastructure development. Is that the peace talks we want? The Caser is really long and the bottom contains their agenda.)

After Parlade’s manifestation, Pangilinan said he disagrees with the military official’s remark that resuming peace talks with the CPP is nonsense.

“I think it’s unparliamentary language to manifest na after we’ve expressed concern about the urgency and the importance of peace talks that one of the resource persons will say ‘Yang peace talks na yan, kalokohan ‘yan’ [‘Those peace talks are nonsense’]. I think that is unparliamentary,” the senator said.

“It is to say, therefore, that this representation’s earlier manifestation is ‘kalokohan’ and I beg to disagree,” he added.