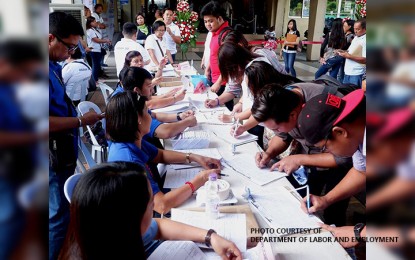 MANILA – The country’s unemployment rate has eased to single-digit in October, coming from a high of 17.7 percent in April and 10 percent in July.

The Philippine Statistics Authority (PSA) reported Thursday that the number of unemployed Filipinos in October slowed down to 8.7 percent, a sign of economic recovery.

This means 800,000 jobs were brought back into the labor market in October, PSA said.

“This improvement in the unemployment rate was driven by the reopening of the economy and it could have been lower if the economy were opened further, coupled with the provision of safe and sufficient public transport,” said Acting Socioeconomic Planning Secretary Karl Kendrick Chua.

He added that the recent typhoons in the latter half of October resulted in significant employment loss in the agriculture sector.

PSA data show that job losses in agriculture from July to October reached 1.1 million, or 70 percent of the 1.5 million jobs lost between the said period.

On the other hand, this was tempered by the services sector as 300,000 jobs were back due to further relaxation of quarantine restrictions and the safe and gradual reopening of more business establishments and activities.

“It’s a good sign of recovery as we have continued the gradual and safe reopening of the economy, although we are not yet at pre-Covid levels of 5 percent,” Trade Secretary Ramon Lopez told the Philippine News Agency.

“We were expecting the unemployment rate to be back at single-digit level.  It would have been better of course if there were lesser restrictions and calamities that hit the country,” he added. (PNA)