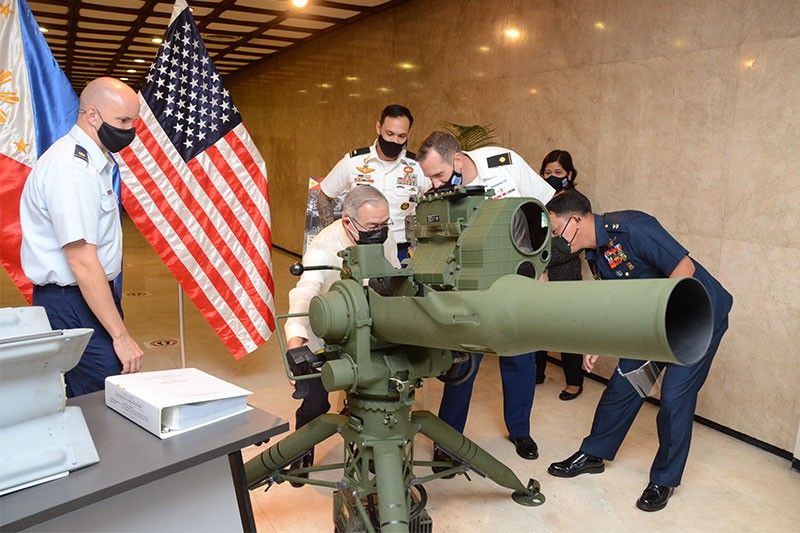 Trump’s promise: US turns over weapons to Philippines

MANILA, Philippines — The United States government on Monday turned over precision-guided munitions worth P868 million ($18 million) to the Philippines.

Foreign Affairs Secretary Teodoro Locsin Jr. said the latest donation fulfills the promise that US President Donald Trump made during a phone call with President Rodrigo Duterte in April.

US National Security Advisor Robert O’Brien handed over the weapons, which included 100 TOW-2A missiles, 12 ITAS and 24 MK-82s, which would help the Armed Forces of the Philippines (AFP) combat terrorism.

“We hope these precision-guided missiles and munitions will help the AFP protect Philippine lives in Mindanao and end the needless suffering imposed by ISIS-East Asia,” O’Brien said, following his meeting with Locsin.

O’Brien added that the transfer of weapons underscores Washington’s “enduring commitment” to its “critical alliance” with Manila, its longtime ally and former colony.

Upon receiving the weapons on behalf of the Philippine government, Locsin said the armed forces are looking forward to training on their use.

“These smart bombs will boost the capability of our armed forces in neutralizing identified or specific threats to national security, particularly in counterterrorism operations,” Locsin said.

Noting that the US has been at the forefront of the fight against ISIS, O’Brien said Trump stands with Duterte as the Americans combat ISIS in Southeast Asia.

Trump’s security advisor also expressed hopes to expand cooperation with the Philippines following the decision of Duterte to further extend the termination of the Visiting Forces Agreement between the two countries.

With the fresh extension, the VFA termination will take effect 69 days after June 1, 2021, according to the Department of Foreign Affairs.

According to Locsin, the president came with the decision to “to enable us to find a more enhanced,  mutually beneficial,  mutually agreeable, and more effective and lasting arrangement on how to move forward in our mutual defense.”

A thread of major developments in the bilateral relations between the Philippines and the United States from April to December 2020. (Photo by AFP/Mark Cristino)

Citing Washington’s realignment of its position on the South China Sea with the 2016 arbitral ruling that invalidate Beijing’s expansive claims, O’Brien stresses that resources in the area belong to the Filipino people.

The US Embassy in the Philippines says the US government has turned over 150 laptop computers, printers, projectors and 80 sets of learning materials to the Department of Education through the United States Agency for International Development.

“This assistance is part of USAID’s Opportunity 2.0, a five-year, P1.9-billion ($37.5 million) project that works with DepEd, the Technical Education and Skills Development Authority, and local governments to support their ongoing programs to provide relevant education, employability skills, and work experience to out-of-school youth,” the US Embassy says in a statement.

The US government launches a new program to provide second-chance opportunities to at least 180,000 out-of-school youth in the Philippines.

Under the five-year “Opportunity 2.0” project, which is worth P1.9 billion, the USAID will partner with DepEd and TESDA to augment their ongoing programs that provide relevant education, employability skills and work experience.

“Through this new partnership, we can leverage a range of resources to maximize the potential of the Filipino youth, particularly those who are out-of-school or unemployed. With the right knowledge, attitudes, and skills, they will play a pivotal role in this great country’s growth and success over the long-term,” US Ambassador Sung Kim says.

US Secretary of State Mike Pompeo called Foreign Affairs Secretary Teodoro Locsin Jr. to discuss the recent change in US policy on maritime claims in the South China Sea, the US Department of State says.

The two foreign ministers also discussed US support for Southeast Asian coastal states upholding their sovereign rights and interests consistent with international law, as well as opportunities for further maritime cooperation between the two countries.

“The two secretaries also discussed the strong economic, security, and people-to-people ties that bind our two countries,” the statement read.

The US Army and Marine Corps service members, in partnership with the Philippine Air Force, Army and Coast Guard, deliver an additional P11.4 million ($236,000) worth of personal protective equipment and medical supplies to hospitals in 11 cities in the Philippines.

The latest donation brings the total assistance of the US government to the Philippines’ efforts against COVID-19 to P989 million (more than $20 million).

“This latest delivery of U.S. government assistance for Filipino frontliners in the battle against COVID-19 is a testament to our ongoing commitment to help the Philippines defeat the pandemic,” US Ambassador Sung Kim says.