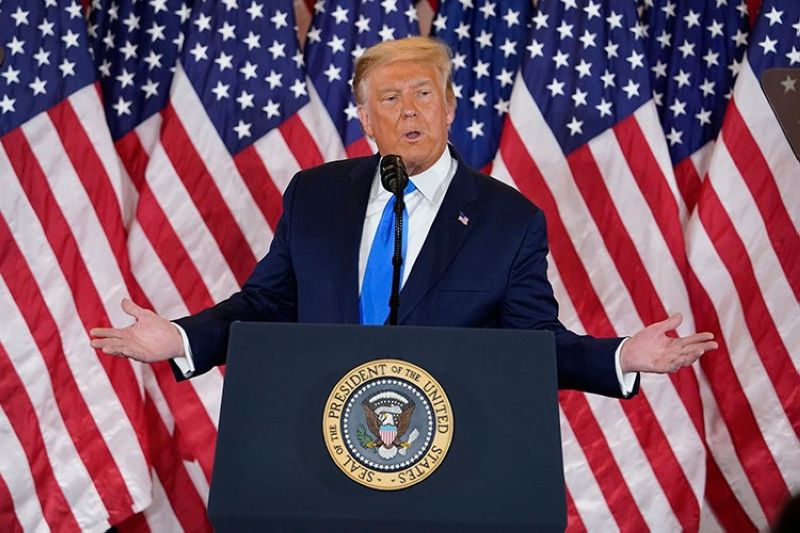 WASHINGTON — President Donald Trump said he will take the presidential election to the Supreme Court, but it is unclear what he means in a country in which vote tabulations routinely continue beyond Election Day, and states largely set the rules for when the count has to end.

“We’ll be going to the US Supreme Court — we want all voting to stop,” Trump said early Wednesday.

But the voting is over. It’s only counting that is taking place across the nation. No state will count absentee votes that are postmarked after Election Day.

“If the president makes good on his threat to go to court to try to prevent the proper tabulation of votes, we have legal teams standing by ready to deploy to resist that effort,” Biden Campaign Manager Jen O’Malley Dillon said in a statement. “And they will prevail.”

Election law expert Richard Hasen wrote in Slate on Sunday that “there has never been any basis to claim that a ballot arriving on time cannot be counted if officials cannot finish their count on election night.”

Ohio State University election law professor Edward Foley wrote on Twitter Wednesday: “The valid votes will be counted. SCOTUS would be involved only if there were votes of questionable validity that would make a difference, which might not be the case. The rule of law will determine the official winner of the popular vote in each state. Let the rule of law work.”

In any event, there’s no way to go directly to the high court with a claim of fraud. Trump and his campaign could allege problems with the way votes are counted in individual states, but they would have to start their legal fight in a state or lower federal court.

There is a pending Republican appeal at the Supreme Court over whether Pennsylvania can count votes that arrive in the mail from Wednesday to Friday, an extension ordered by the state’s top court over the objection of Republicans. That case does not involve ballots already cast and in the possession of election officials, even if they are yet to be counted.

The high court refused before the election to rule out those ballots, but conservative justices indicated they could revisit the issue after the election. The Supreme Court also refused to block an extension for the receipt and counting of absentee ballots in North Carolina beyond the three days set by state law.

Even a small number of contested votes could matter if either state determines the winner of the election and the gap between Trump and Biden is so small that a few thousand votes, or even a few hundred, could make the difference. (AP)