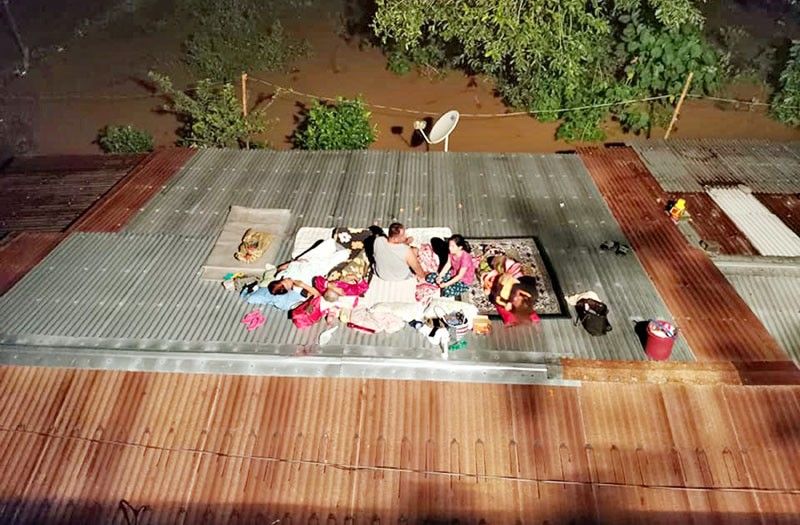 MANILA, Philippines — It was pitch black and with floodwaters still rising, desperate residents trapped on rooftops in Cagayan had no other option but to scream for help.

A video uploaded on social media showed nothing but darkness, but residents could be heard calling for rescue as floodwaters reach their refuge.

On Friday, social media platforms were besieged with appeals for rescue as night crept in and floodwaters – caused in part by the release of water from Magat Dam – continued to rise.

Not long after, #CagayanNeedsHelp became the top trending topic on Twitter, garnering over 1.4 million tweets as of Saturday afternoon.

“Hear those voices. Imagine the amount of anxiety they are experiencing,” read a caption to the video that was repeatedly uploaded by multiple accounts.

“Trigger Warning: Do not play this video if you don’t like hearing people’s scream and cries. This is what the people of Cagayan are going through,” read another.

Related hashtags and terms continued to dominate social media, including the phrase “people are dying” and rescue signals for those trapped in their homes.

There were those who were electrocuted, read some of the posts.

Dead bodies were already floating, said the others.

Yesterday morning, the extent of the devastation became clearer: Almost the entire province, along with many parts of adjacent Isabela, was underwater.

Cayagan Gov. Manuel Mamba said it was the worst flooding the province experienced in decades. At least nine people were killed, he said.

“Our prayers for Cagayan and Isabela,” she said in an update on her Twitter account on Friday night, hours after she personally visited evacuation centers in Marikina and Rizal, which were also flooded by Ulysses.

“Reading posts now of people asking to be rescued. We deployed our security team to coordinate with AFP all the calls for rescue we are reading now,” she added.

Throughout the night, it was Robredo who posted updates about the situation.

“Phil Army already deployed a platoon there yesterday but they have difficulty adding more because Alcala is no longer passable. Looking for more amphibious assets. LGU has a working Task Force with volunteers but floods have swelled already,” she said in a tweet around 11 p.m.

“While waiting for augmentation to reach Tuguegarao, our team was able to get in touch with PNP Tuguegarao. We forwarded all the compiled requests and calls for help. Limited assets now but MEDEVAC will be prioritized,” she added two hours later.

Early Saturday, she said their team was taking note of all calls for help and was forwarding them to rescue teams on the ground.

“Was informed by our team that two choppers already took off from Clark about an hour ago. After prepositioning in Cauayan City, air rescue will already commence,” she tweeted around 8 a.m. on Saturday.

A common concern raised by many was the lack of media coverage of the situation in Cagayan.

Several journalists noted the local government policy requiring a two-week quarantine for visitors, making it difficult for the media to deploy personnel in the province.

ABS-CBN used to have a bureau in the region but shut it down after Congress denied its bid for franchise renewal.

Citing the role of the discharge from dams in the heavy flooding in the region, an infrastructure-oriented think tank said the absence of a single government authority managing multi-dam discharges during heavy rainfall is “nothing but criminal incompetence.”

“This is nothing but criminal incompetence and failure of leadership by the national government. Discharge protocols are left to the discretion of dam operators,” said Infrawatch PH convenor Terry Ridon.

“Without a central authority managing the proper and timely discharge of various dams, water is discharged in river systems already overburdened by heavy rainfall. No less than the heads of NIA (National Irrigation Administration) and Napocor (National Power Corp.) should be made accountable for this unacceptable criminal oversight,” he added.

Ridon said the impact of Typhoon Ulysses could have been mitigated with well-planned multi-dam discharges under a single authority.

Citing information from the Philippine Atmospheric, Geophysical and Astronomical Services Administration, Ridon noted that dams seemed to have rushed to discharg water only at the height of Ulysses.

Ridon said Ipo and Angat opened their gates only on Nov. 12, while Caliraya issued a notice of dam discharge at 2 a.m. on that day.

Magat Dam, which reportedly triggered the flooding in Cagayan, had two gates open on the morning of Nov. 12 when Ulysses made landfall, and then opened seven gates the day after.

“Magat did not make sufficient water drawdown two to three days prior to Ulysses, as mandated by its protocol, because its gates were not even open three to four days prior to landfall,” observed Ridon.

He said dam officials should have prepared for the incoming typhoons through “an aggressive but programmatic dam discharge in preparation for heavy rainfall during this time.”

“We had 11 years since Ondoy to prepare for this exact same moment yet Marikina and Cagayan Valley are flooded as a result of unmanaged dam discharges,” said Ridon.

“Was the massive dam discharges in the early morning hours of the typhoon a result of poor management? We demand answers from the highest levels of government,” he added.