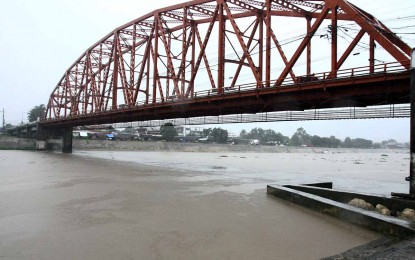 RISING WATER. Authorities are closely watching the increase of the water level at Agusan River in Butuan City, as TD Vicky continues to bring heavy rains and strong winds in the area and the nearby towns in Agusan del Sur. Local governments in Caraga Region activated their respective disaster management councils to respond to the flooding and other effects of the inclement weather. (PNA photo by Alexander Lopez)

As of 2 p.m. Friday (Dec. 18), the water at Agusan River remains far from critical level, although disaster management officials said it is expected to change amid the reported flooding in nearby provinces, particularly in Agusan del Sur.

The CDRRMC said it has already conducted a Pre-Disaster Risk Assessment (PDRA) on Friday afternoon to prepare for emergency situations arising from the effects of TD Vicky.

In Agusan del Sur, officials said rescue operations for residents in flooded areas are still ongoing in several towns as of posting time.

“Most of the towns near the major rivers are affected by floods, specifically in the towns of San Francisco, Rosario, Bunawan, Prosperidad, and Talacogon,” Alfredo Plaza, the chief of information of the provincial government, told Philippine News Agency late Friday afternoon.

Earlier in the day, Plaza said Gov. Santiago Cane ordered the activation of MDRRMOs in the province to provide emergency rescue operations, even as officials called on the residents living along low-lying and flood-prone areas to head to safer grounds.

“We have yet to determine the number of families affected. Right now, our priority is to rescue those who are affected by floods as water levels of major river systems here rise,” Plaza said.

He said the provincial capitol in Patin-ay, Prosperidad town, is also hit by flooding.

In San Francisco town, Agusan del Sur, Mayor Solomon Rufila ordered the suspension of all work in the public and private offices as floodwaters hit most of the major streets in the area.

In Bunawan, Agusan del Sur, the local government requested school officials to open their facilities to families who fled their flooded homes.

Meanwhile, officials in the neighboring town of Rosario reported that the national highway was no longer passable as of Friday afternoon.

FLOODED STREET. Several Butuan City residents are stranded following the flooding on major streets on Friday (Dec. 18, 2020) due to heavy rains brought by Tropical Depression Vicky. Local governments in Caraga Region activated their respective disaster management councils to respond to the flooding and other effects of the inclement weather. (PNA photo by Alexander Lopez)

In Surigao del Sur, clearing operations are ongoing in Barangay Poblacion in the town of Lingig due to a landslide.

Officials in the city of Bislig reported that rescue operations were being conducted in Barangays Mangagoy and Tabon for residents trapped by the rising waters.

On Friday morning, Surigao del Sur Gov. Alexander T. Pimentel ordered the activation of all local Disaster Risk Reduction and Management Councils in the province and asked all local chief executives to mayors to remain in their area of jurisdictions for the duration of TD Vicky.

In Surigao del Norte, Engr. Marilyn Pono, chief of PDRRMO, said all MDRRMOs have been activated after a directive from Gov. Francisco Matugas Friday afternoon.

“As of Friday afternoon, we are monitoring the status of the water levels in all major river systems in the province, particularly the Bitan-ag River and the Alimpatayan River in the town of Alegria. So far, none have reached critical levels as of this time,” Pono said.

She also reported the rescue operations conducted to a family in Barangay Del Rosario in Tubod town due to flooding.

Surigao City and several municipalities in the province also suffered three successive power outages that the National Grid Corporation of the Philippines attributed to “tripping” of several transmission lines in the province due to strong winds.

Power was restored around 7 p.m. (PNA)