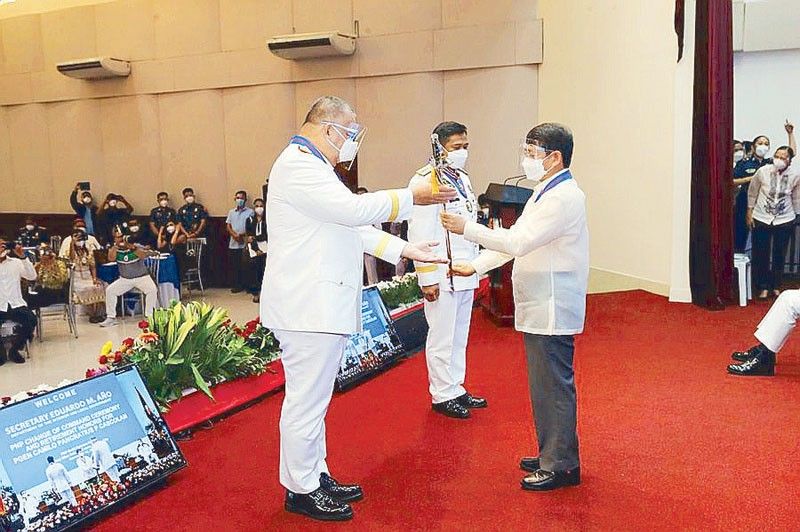 Interior and Local Government Secretary Eduardo Año said the President gave the orders at a command conference at Malacañang on Monday, just hours after the announcement of Sinas’ appointment as successor to Gen. Camilo Cascolan, who reached the mandatory retirement age of 56.

“The President gave emphasis to the war on illegal drugs and on the CPP/NPA/NDF,” Año said in Filipino in an interview over Teleradyo yesterday.

He said Duterte also wants Sinas to cleanse the PNP ranks of misfits and instill discipline among members of the police force. “There must be no room for scalawags,” Año said.

Duterte chose Sinas as the new head of the 200,000-strong PNP despite the uproar over his breaking the law against mass gatherings when he held a mañanita or morning birthday party last May while the country was under strict lockdown.

He was also being investigated for allegedly harassing a family of a retired policeman to force them to leave a police compound in Taguig City.

Nonetheless, Año said Sinas is qualified for the post, citing the latter’s stint as commander of police forces in Metro Manila and Central Visayas. He added the cases filed against Sinas were still under preliminary investigation.

“They’re not yet in the courts, therefore they can’t be considered pending cases,” Ano said in Filipino.

Sinas, a member of the Philippine Military Academy Class of 1987, will retire on May 6, 2021. Among his classmates are PNP deputy chief for administration Lt. Gen. Guillermo Eleazar and deputy chief for operations Lt. Gen. Cesar Binag.

Presidential spokesman Harry Roque Jr. said the administrative and criminal complaints against Sinas were not legal impediments to his appointment as PNP chief.

“The more important case is the criminal one. That’s pending before the desk of the Chief Prosecutor of Taguig and because of that, Chief Sinas is not facing any criminal charges,” Roque said.

“So, when it comes to the administrative (case), well, it’s already there. It is not yet dismissed. But the appointment of course will have no bearing on the decision of the Taguig Prosecutor’s Office,” he added.

For Senate President Pro Tempore Ralph Recto, Sinas should use the controversy he is involved in to prove his critics wrong.

“I think he should use that controversy he was embroiled in earlier this year as a powerful motive to prove his critics wrong,” Recto said.

Recto said some of the important “mission orders” for Sinas are spelled out in the “performance guarantees” the PNP has attached to its P190.8-billion budget request for 2021.

“High in the PNP ‘promissory note’ is a maximum response time of 15 minutes from the time a call for help is received,” Recto said.

“Also in the PNP performance guarantees are the reduction of the national crime index rate by six percent, ramping up the crime solution efficiency by seven percent and increasing the number of arrested high value targets by five percent,” he said.

Recto said performance guarantees of an agency form part of the General Appropriations Act. “This is a budget reform measure which pegs countable deliverables to pesos received.”

He said another “budget promise” of the PNP is to increase the recruitment of commissioned and non-commissioned officers by five percent. He said there are 30,522 “vacant and unfilled” positions in the national police force. “If you fill just half of these, you can send 10 more policemen to every town in the country.”

Recto said the PNP should also keep track of audit reports on how its previous budgets were spent.

“The balance – if there’s any – of the more than P1 billion given by the PNP to the Philippine International Trading Corp. to buy equipment should be accounted for by him,” he said.

Purchases already delivered, he added, should be properly maintained, “especially patrol cars whose lifespan can be extended if the PNP will hire more non-uniformed personnel who can drive and maintain these.”

Recto said Sinas should also accelerate the program to equip officers and patrol cars with body and dashboard cameras.

He said at the rate the PNP was buying bodycams, “it would take 100 years” to provide every policeman with one, or “20 years if the target is to equip just one in five policemen.”

Muntinlupa City Rep. Ruffy Biazon, senior vice chairman of the House committee on national defense and security, also said there is still a chance for Sinas to prove his critics wrong.

“With the mañanita issue, he would just have to show that he has learned a lesson from the lapse by giving an excellent performance as PNP chief,” Biazon said.

“I’ve had the chance to work with General Sinas at the National Capital Region Police Office (NCRPO) Regional Advisory Council and he showed commitment in pursuing the Performance Governance System (PGS) in the NCRPO,” Biazon said.

“He was proactive in ensuring that the NCRPO was not only compliant, but proficient. He had good rapport with the stakeholders as shown by the cooperation of the business community in the reform initiatives undertaken under the PGS,” he added.

Rep. Alfredo Garbin of party-list Ako Bicol called on the new PNP chief to “assure all Filipinos of their safety and security.”

“Public trust in the police has been shaken because of the continuing involvement of some police officers in illegal drugs, illegal gambling, red-tagging and rape,” he said, adding that Sinas should also publish a list of dismissed and AWOL enforcers.

“These personnel who betrayed the public trust would likely resort to criminal activities on their own or as part of syndicates. It is but right that the media and the general public are made continually aware of the threat they pose to our safety and security,” Garbin warned.

Members of the six-man Makabayan bloc, meanwhile, are against Sinas’ appointment.

“We know Sinas from his stint in Western Visayas when numerous extrajudicial killings and illegal arrests were rampant. Of course, he is also well known for breaking numerous quarantine protocols just to have a mañanita,” Bayan Muna Rep. Ferdinand Gaite said.

“The people should always be vigilant and stand against this tyrannical rule aimed to silence and curtail our basic human rights,” he said.

“Debold Sinas leaves a trail of destruction wherever he goes,” NDF-Negros spokesman Bayani Obrero said in a statement.

Appointing him as new PNP chief is adding salt to the injured families and kin of victims, he stressed, adding that the cries for justice and accountability will remain unanswered under the Duterte regime.

He also said Sinas’ “iron fist” treatment of quarantine violators has made the lives of Metro Manila residents even harder.

“He was also behind the police’s high-handed and inhumane treatment toward political detainee Reina Mae Nasino during the wake and burial of her three-month-old daughter last month,” Valbuena said.

“He was also behind the mass arrest of around 50 activists in Bacolod City and the police raid at the office of Bagong Alyansang Makabayan in November 2019, when Nasino was arrested. He was reported to have personally talked to Quezon City Regional Trial Court Judge Cecilyn Burgos-Villavert who issued questionable search warrants,” he added.  – Cecille Suerte Felipe, Delon Porcalla, Gilbert Bayoran, Artemio Dumlao