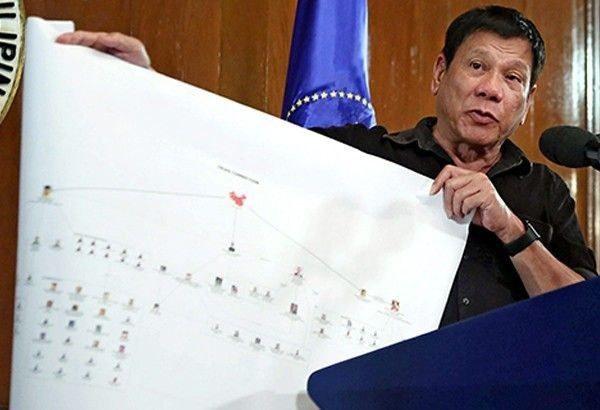 Roque: Duterte’s narco list has basis but not enough to stand in courts

Perez, who was shot inside the municipal hall last week, was the latest to be killed in what has been at least a dozen local chief executives murdered under the Duterte administration.

The president, who has carried out an anti-illegal drug campaign that had seen thousands killed, named the Los Baños mayor as part of his “narco list” in 2019, two years after Perez was stripped of his powers over the town’s police for his alleged links to the drug trade.

In a regular press briefing, Roque, who was once known as a human rights lawyer, said he had inquired about the narco list’s credibility in his years as a congressman.

And while he said there were leads pointing to those included, it had not been sufficient to charge them. Duterte, who himself is a lawyer, has also not provided evidence to support his allegations.

“What I understand is there is really information to that, although it is not yet enough to stand as cases before our courts,” Roque said in Filipino. “There is basis but what I know is charges haven’t been filed yet as case build up is still ongoing.”

Salvador Panelo, counsel to the president, admitted in a 2019 interview that building cases may take time with documents and other evidence needed. It has, however, exposed those in it to risks, with the worst-case scenario of them being put down.

Despite the latest string of local officials killed, Roque sought to maintain that there is no cause for alarm as he said government is doing its job.

“I don’ think so because the State is fulfilling its obligation to investigate,” he said, still in Filipino. “We will exhaust the remedies for the mayor’s family according to our laws here.”

Authorities have yet to report on the progress of investigations on the mayors murdered, and it is not clear if the cases have been resolved or still ongoing.

On Sunday, top opposition figure Vice President Leni Robredo said killings in the country appeared to have been normalized, along with judges, lawyers as well as media men killed.

The country’s No. 2 has said that government’s failure to hold perpetrators to account shows its inability to bring justice to families and protect its own people.

Such killings continue to put a dispute on findings by the US-based analytics group Gallup Inc. that the Philippines is among the world’s top 50 safest countries this year.

In its 2020 Global Law and Order Index, the country was tied with Australia, New Zealand and Poland, to name a few, with no less than Duterte admitting that he too was surprised over it.

The results run counter to reports by international watchdogs, including the United Nations’ human rights office, who said abuses related to Duterte’s drug war, as well as the killing of those in the legal profession and human rights advocates continue under the present administration.