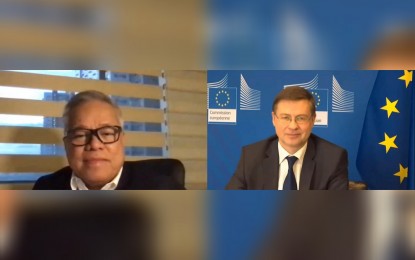 DIALOGUES. Trade Secretary Ramon Lopez and European Commission Executive Vice President Valdis Dombrovskis met virtually on Dec. 8, 2020 and discussed trade and investment-related dialogues between the Philippines and the European Union (EU) in 2021. The Philippines and EU are eyeing to hold at least two trade dialogues next year. (Photo courtesy of DTI)

MANILA – The Philippines and the European Union (EU) are eyeing to hold at least two trade dialogues in 2021, affirming the strong economic partnership of the two parties.

In a statement Friday, the Department of Trade and Industry (DTI) said Secretary Ramon Lopez met virtually with European Commission Executive Vice President Valdis Dombrovskis last Dec. 8 to discuss the future of the Generalised Scheme of Preferences Plus (GSP+), a possible EU-PH free trade agreement (FTA) and other trade and investment-related matters.

Lopez said the Philippines stands ready to engage with the EU for a dialogue to conduct a technical mission on GSP+ early next year.

A delegation from the EU was supposed to visit Manila September this year for the regular monitoring under the GSP+.

The DTI chief said the GSP+ is more crucial for micro, small, and medium enterprises in times of the pandemic.

Lopez and Dombrovskis also discussed the convening of the Sub-Committee on Trade, Investment and Economic Cooperation under the PH-EU Partnership Cooperation Agreement in 2021.

The sub-committee will discuss the negotiations for a possible FTA between the EU and the Philippines.

The Philippines and the EU began their exploratory talks on the bilateral free trade deal in 2013.

The two parties already had two rounds of negotiations –one in Brussels in 2016 and the second was in Cebu City in 2017.

“There is a strong call from the business sector to continue the PH-EU FTA negotiations. There is a big opportunity for EU businesses to expand here in the Philippines—not just to access our huge domestic market, but equally important is to use the Philippines as a base for export manufacturing to access the RCEP market,” Lopez said.

The Philippines was a signatory to the FTA among ASEAN and its five FTA partners namely Australia, New Zealand, China, Japan, and South Korea.

Lopez said through the RCEP,  European businesses can set up their manufacturing facilities in the Philippines and export their products to RCEP participating countries at zero tariff.

The trade chief said his meeting with the European Commission official indicates the strong partnership between the Philippines and the EU.

“We hope to push for deeper trade and investment engagements by maximizing the benefits from the GSP+ and through a possible FTA with them,” Lopez added. (PNA)