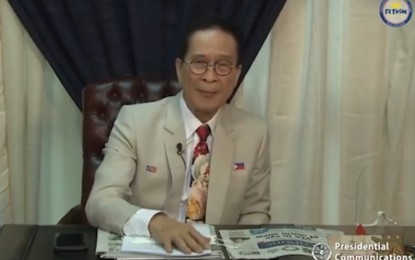 Panelo issued the statement, as he chided Senator Francis Pangilinan and Bayan Muna party-list Rep. Carlos Isagani Zarate for criticizing the government over its supposed failure to secure 10 million doses of Covid-19 vaccine from Pfizer.

Pangilinan, on the other hand, said government officials involved in the delayed procurement of Covid-19 vaccines from Pfizer may face graft charges.

Zarate and Pangilinan’s remarks came after Health Secretary Francisco Duque III was accused of “dropping the ball” by failing to submit the confidentiality disclosure agreement on time for the procurement of Pfizer vaccines.

Responding to the two lawmakers’ claims, Panelo denied that the government is delaying the delivery of Covid-19 vaccines from Pfizer.

“Sinasabi, nabigo ang gobyerno (They are saying the government has failed) to secure 10 million [doses] of Pfizer [vaccine]. Ang problema sa’nyo nakikinig sa tsismis (The problem is they are just relying on hearsay),” Panelo said.

Panelo said there might just have been a “misunderstanding” between the government officials of the United States (US) and the Philippines who are currently holding talks about the Duterte government’s intent to procure 10 million doses of the Pfizer vaccine.

He, nevertheless, ensured that the Philippines is still bent on acquiring Pfizer vaccines.

“Sa akin, eh nagkaroon lang siguro ng (For me, perhaps, there was just a) miscommunication. Alam niyo na (You know), whether there is miscommunication, certain issues will crop up. The truth of the matter is we’re still negotiating and the deal is still on,” Panelo said.

Foreign Affairs Secretary Teodoro Locsin Jr., in a Twitter post, said someone had “dropped” the ball” on negotiations with Pfizer on the delivery of 10 million doses of Covid-19 vaccine in the Philippines.

Senator Panfilo Lacson later claimed that Duque failed to prepare the confidentiality disclosure agreement for the acquisition of Covid-19 vaccines with Pfizer.

Panelo guaranteed that Duterte, being an “action man,” would not allow delays in the purchase of Covid-19 vaccines.

He said the government is merely being “careful” to make sure that deals for Covid-19 vaccines that will be purchased from developers in other countries would not be “onerous”.

“Aba’y syempre, kinakailangan maging maingat naman tayo (Of course, we need to be careful). Kailangan tingnan natin (We need to assess if) this is onerous to the government,” Panelo said.

Malacañang earlier said the Philippines is currently holding talks with other big pharmaceutical companies Sinovac, Sputnik V from Russia, and AzstraZeneca from the United Kingdom for potential vaccine deals. (PNA)