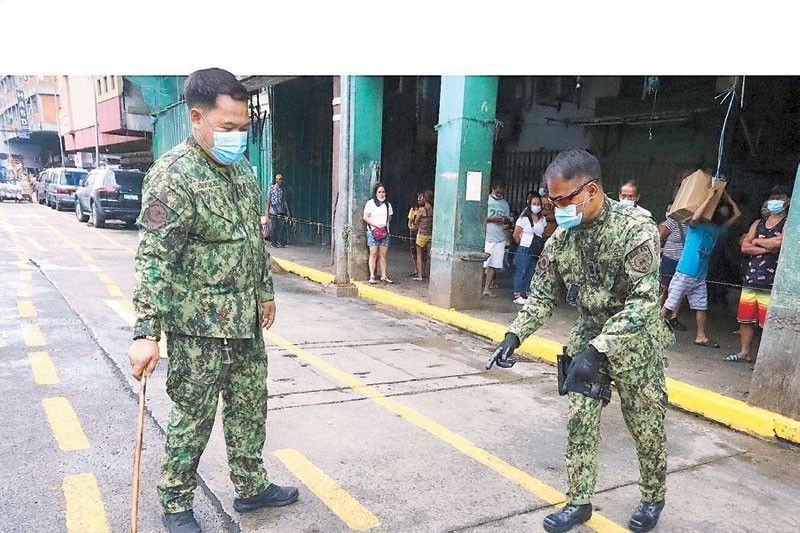 Palace tells PNP: Use ‘yantok’ only for measuring physical distance

MANILA, Philippines — A recent order within the police force to use rattan sticks for individuals failing to follow health protocols against the coronavirus pandemic was shot down by Malacañang on Monday.

PNP’s deputy chief for operations Lt. Gen. Cesar Binag had said that the yantok, as locally called, would be used by cops “to hit hardheaded individuals” ahead of the holidays as health officials brace for a possible surge in COVID-19 infections.

Even Foreign Affairs Secretary Teodoro Locsin Jr. said he was against the directive, telling PNP to “do what the superior races do” that is, putting huge fines on supposed violators.

In today’s briefing, presidential spokesperson Harry Roque said the sticks could be used for measuring the required one meter physical distance, but not for those who fail to follow it.

“I think Secretary Locsin is right,” he said. “You can’t use that to hit someone because that is not allowed by the law or even within PNP’s regulations.”

President Rodrigo Duterte in the early stages of the outbreak in the country put the military and police in charge of carrying out coronavirus-related curbs, including manning borders and deploying personnel to areas to ensure that health standards continue to be followed with the country emerging from the months-long hard lockdown.

The human rights commission over the weekend warned authorities against using unnecessary force, with government long facing the criticism that it has militarized its response to a public health crisis.

PNP had since scrambled to deny that there was such as order, including that it was its chief, Police Gen. Debold Sinas, himself figuring in a quarantine violation in May, who issued it.

A spokesperson for the police told Pilipino Star Ngayon that “there is no intention to use [rattan sticks] to intimidate or hit.”

“In fact, the use of yantok for COVID-19 is to avoid touching and to maintain distancing [between] individuals,” said Police Brig. Gen. Ildebrandi Usana.

The health department has said that it was alarmed over photos of huge crowds in commercial centers, such as the well-known Divisoria in Manila.

Undersecretary Maria Rosario Vergeire told the public that the “risk is still high” in flocking to the said areas despite wearing face mask and shield, along with following the one meter distance.

Coronavirus infections in the Philippines stood at 441,399 on December 7, and it has remained as the second highest in Southeast Asia.

Metro Manila and other “highrisk” areas were placed under a modified enhanced community quarantine last May 16, which is more relaxed than ECQ, but has more restrictions compared with the general community quarantine (GCQ). Bookmark this page for updates. Photo by The STAR/Michael Varcas

The Zamboanga City government strongly opposes proposals of Interior Secretary Eduardo Año in allowing children to go to malls and other public places with their parents.

The local official and health authorities also disapprove of the possibility of expanding the manner of classes to face-to-face classes engagement as part of the ‘new normal.’

“It is not still safe to allow children to go out except for medical reasons or emergency cases,” Salazar says in her virtual presser. —  The STAR/Roel Pareño

Sen. Bong Revilla, who earlier tested positive for COVID-19, was rushed to the hospital, according to his wife Bacoor Mayor Lani Mercado.

“He is being rushed to the hospital. His latest X-ray shows that he has developed pneumonia and isolation in a regular facility is no longer ideal,” Mercado says in a Facebook post Tuesday.

The DOH also logs 182 new recoveries, bringing the total of recovered patients to 112,861. The national death toll is now at 2,687 with the addition of 7 new reported deaths.

Total active cases (net of COVID-19 deaths and recoveries) in the Philippines is now at 53,665.

The Department of Health reports 3,314 additional confirmed cases of COVID-19 in the Philippines, bringing the total cases on the country to 164,474.

The total active COVID-19 cases (net of deaths and recoveries) in the Philippines is now at 49,034.

According to Roque, there is a velvet rope keeping people six feet away from the president.

In August, Duterte had a meeting with DILG Secretary Eduardo Ano, who later on tested positive for the virus once again.