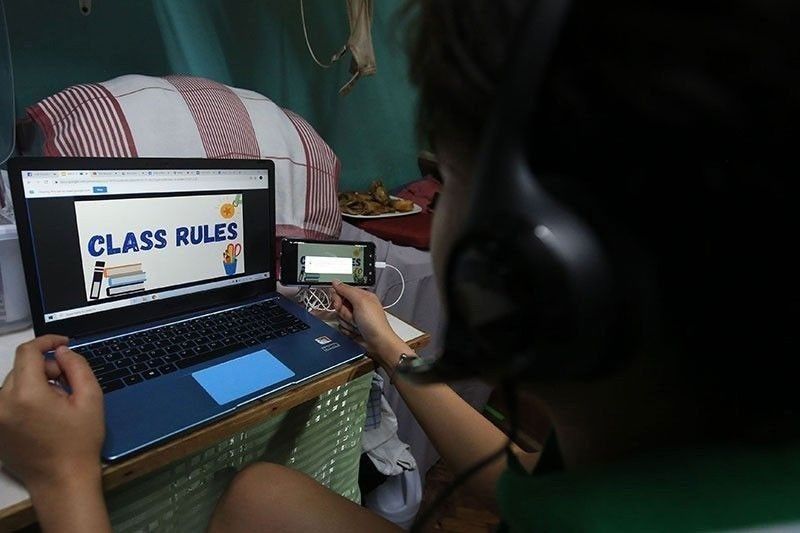 MANILA, Philippines — Malacañang yesterday supported the Commission on Higher Education (CHED)’s move to reject calls for a nationwide or Luzon-wide academic freeze in the aftermath of the series of typhoons that hit the country in the past weeks.

Presidential spokesman Harry Roque said CHED has already rejected calls for an academic freeze, but has given colleges and universities an extension of at least a week or two for the required academic period, which employs blended learning.

Roque yesterday held a press briefing in the town of Alcala, Cagayan, one of the affected municipalities in the massive flooding spawned by Typhoon Ulysses over the weekend.

CHED has been clear about rejecting the suggested academic holiday, according to Roque.

“There will only be extension, but no academic break for those affected by the disasters,” he said.

CHED chairman J. Prospero de Vera III earlier yesterday rejected calls for a nationwide or even Luzon-wide suspension of classes following the series of typhoons that hit the country.

“No to both, especially for the nationwide academic break, because the impacts of the typhoon and the disasters are different across different parts of the country,” De Vera said in an interview with CNN Philippines yesterday.

Local government units and school authorities are in a better position to decide on the calls for academic break, according to the CHED chief, pointing out that its impact should be discussed with students and faculty.

“The decision on the academic calendar is a decision by individual universities in the exercise of academic freedom… (But) they have to discuss with the students what is the impact of reducing the semester. Because if you reduce it, the potential workload of the students and the faculty will be heavy,” he said.

“A unilateral suspension is not a good policy. We cannot make unilateral decisions that are not based on what is actually happening on the ground,” he added.

De Vera said universities may take a short academic break and wait for things to normalize, urging those that made such decisions to consider extending the current semester.

“You can end the semester in January. Adjust the (start of the) second semester in February. It is possible that you can give up the summer break or the break between school years or reduce it so that you have more time for the regular semesters,” he added.

Several higher education institutions, including the University of the Philippines, University of Santo Tomas, Ateneo De Manila University and the De La Salle University, have declared academic breaks until Nov. 21.

The Polytechnic University of the Philippines, meanwhile, suspended all synchronous and asynchronous activities until Nov. 27.

In Marikina, Mayor Marcy Teodoro suspended classes in all levels for one month, or until Dec. 15.

Given that most colleges and universities are originally set to end their semesters in December, De Vera said school officials in Marikina must discuss the possibility of extending the semester due to the month-long suspension.

The Department of Education (DepEd) said the schools division office of Marikina is discussing ways to ensure that the students in elementary and high school will be able to catch up once classes resume.

The DepEd had earlier authorized regional officials to suspend classes in areas affected by disasters.

Meanwhile, at UP, hundreds of faculty members have signed a petition calling on the university administration to immediately end the semester in light of the pandemic and the recent disasters.

The petition noted that the shift to distance learning broadly discriminates and leaves many students behind.

“Students and faculty alike are subjected to an unjust workload and mental burden on top of anxieties that the pandemic has inflicted,” the petition read.

“The struggles of the learners are further intensified by the recent calamities, leaving students and faculty from Bicol, Cagayan, Isabela, Marikina and Rizal, among others, with an indefinite and debilitating loss of electricity and internet connection, destruction of properties and homes and loss of loved ones,” it added.

The petitioners recommended a pass or drop system in lieu of a numerical grade, with those affected by typhoons given more consideration.

Responding to the call, De Vera – who co-chairs the UP Board of Regents – said those calling for ending the semester would have to go to the board, which has the authority to decide on such matters.

He nixed the proposal when asked for his position on the matter.

“You end the semester if you cannot do anything anymore to continue the learning of the students. You could extend the semester. There is no reason to unilaterally suspend the whole learning process,” he said.

“Number two, there are many ways to continue learning. If there are problems with online connections, you can do asynchronous learning, you could do it by modules,” he added.

The DepEd has committed to provide assistance to teachers and other personnel who were severely affected by the recent typhoons that hit the country.

“I have directed all field offices, through their respective regional directors, to submit lists of teachers and personnel who were severely affected by the recent typhoons and flooding,” Education Secretary Leonor Briones said in a statement yesterday.

“These lists will be utilized to fully assist our people in need during these times,” Briones added.

The DepEd chief did not specify the type of assistance that will be provided to those affected by the recent disasters, but she said voluntary contributions from officials and staff across the agency “have been pouring in to help our fellow Filipinos recover from these calamities.”

These, she said, have been sent directly to the most affected schools.

Briones said they would also expedite the processing of benefits for DepEd staff, including the yearend bonus and cash gift of P5,000 to all personnel.

“Recently, we are making headway in helping our personnel in getting the Government Service Insurance System and other private lending institutions’ calamity loan,” she said.

“The department will also provide provident fund emergency loans to the teaching and non-teaching personnel who were affected by the recent typhoons,” she added.

On the learning materials damaged by the typhoons, Briones said the DepEd would release additional funding for the reproduction or replacement of the said self-learning modules.

Funds have also been downloaded to provide hygiene kits and conduct clean-up drive and psychosocial first aid to affected schools, according to the education chief.

“Education has truly taken a hit from these calamities, and if we are here to revive it, our priority will be our passionate educators and learners. We shall overcome,” she said.

With thousands of schools damaged due to typhoons every year, the DepEd reiterated its plan to revise school designs to ensure that facilities can withstand stronger typhoons and earthquakes.

The extent of impact of Ulysses has yet to be determined.

Undersecretary for administration Alain del Pascua said DepEd engineers are drawing up proposals for new school designs but noted that the reconstruction or rehabilitation efforts will vary, depending on the current status of school buildings and available funds.

“We have to go back again to the drawing board because the typhoons are getting stronger,” Pascua said in English and Filipino.

“Our target is within the next 15 to 20 years, our schools should still be standing and are not damaged,” he added.

Aside from new designs, Pascua said local DepEd engineers and school heads should work together to ensure that only appropriate materials will be used by winning contractors.

In related developments, militant lawmakers yesterday supported the calls of university students for government accountability over alleged negligence in responding to the recent string of typhoons.

Bayan Muna party-list Rep. Ferdinand Gaite and Kabataan party-list Rep. Sarah Elago backed the move of student groups from Ateneo de Manila University, University of the Philippines and several other universities to hold “student strikes” and boycott of academic activities as protest against the administration.

“Their calls are justified… After the typhoons, the best that Duterte and his minions could do are aerial inspections that at best only served as photo opportunities for himself and his aide-de-camp,” Gaite said in a statement.

The congressman alleged that due to the administration’s “incomparable incompetence,” communities in Bicol, Southern Luzon and Cagayan Valley already reeling from the COVID-19 pandemic now have to suffer further due to the devastation of recent Typhoons Quinta, Rolly and Ulysses.

“Clearly, Duterte is incapable, if not entirely uninterested, in fulfilling his duty to serve the people. In losing the trust and confidence of the youth – our country’s future, in abandoning the most vulnerable in the moment of dire need, in failing to lead when his leadership is most needed, Duterte already lost his mandate,” Gaite claimed.

Meanwhile, Elago expressed solidarity with youth groups, student councils and publications in holding the “YouthStrikePH” yesterday at the Ateneo.

“Kabataan Partylist enjoins all students, teachers, school and university administrators and the Filipino people to stand up and take action against Duterte and his administration’s criminal negligence on the pandemic, education and calamities. Together, let us hold them accountable and continue to advance the struggle for the demands and urgent needs of the Filipino people in these times of pandemic and calamities, and beyond,” the group said in a statement.

They likened the students’ action to the Czechoslovakian students’ fight against the Nazi occupation, which symbolized the “fight against state fascism.” – Edu Punay, Emmanuel Tupas