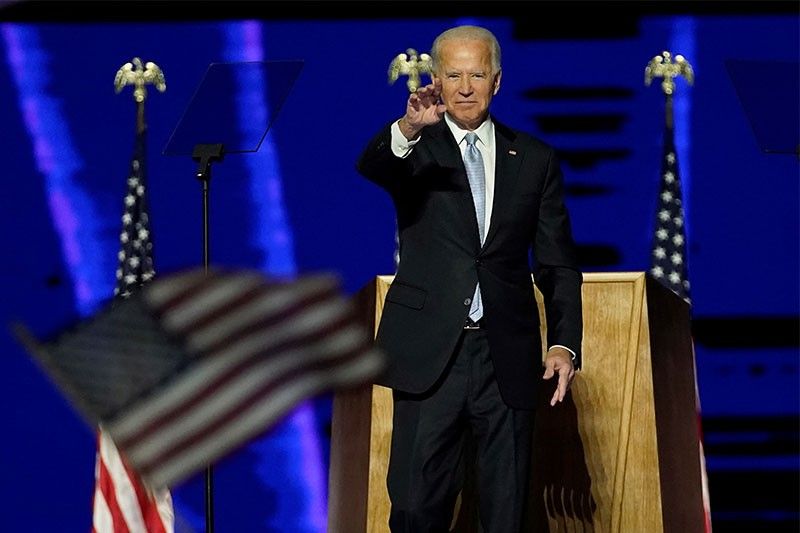 MANILA, Philippines — While it does not see major changes in the ties between Manila and Washington, Malacañang is hopeful that the administration of American President-elect Joe Biden will help Filipino illegal immigrants legalize their stay in the United States.

There were about 10.5 million unauthorized immigrants in the US in 2017, according to think tank Pew Research Center. Recent reports have estimated the number of Filipinos illegally staying in the US to be about 300,000.

“When it comes to immigration, we hope there will be a policy shift under a Democratic administration because many Filipinos are living in the United States. Although some of them are TNT’s (‘tago nang tago’ or always in hiding) or illegals, they have played a huge role in the United States and we hope they will be given an opportunity to (legalize their stay),” presidential spokesman Harry Roque said at a press briefing yesterday.

“I hope they will help Filipinos who are now living in the United States but who have no papers because that is a major policy difference between Republican and Democratic administrations. Otherwise, we expect everything to be stable, no major change,” he added.

The administration of Republican US President Donald Trump has intensified the crackdown against illegal immigration, saying it is taking away jobs from Americans. President Rodrigo Duterte had said he won’t lift a finger to help illegal Filipino immigrants if they are caught because they are violating the law.

Roque said the policies on the South China Sea and defense would continue despite the change in leadership in the US, a traditional ally of the Philippines.

“I think America is also consistent with their foreign policy so there will be no major changes,” the Palace spokesman said.

Asked whether Duterte sees any reason to reconsider his decision to abrogate the Visiting Forces Agreement with the US, Roque replied: “I do not have any basis yet to answer that because the declaration of the president is there would six months postponement of the abrogation of the VFA, to be extendable by another six months.”

“So as it stands, that remains the declaration of our president,” he added.

Signed in 1998, the VFA allows Philippine and American troops to conduct joint trainings in Philippine soil, a deal that activists claimed would violate Philippine sovereignty.

Last January, Duterte said he was scrapping the VFA because of the cancellation of the US visa of his ally and former police chief Sen. Ronald dela Rosa. Palace officials, however, claimed there were other reasons for the abrogation of the agreement, including the US Senate resolution condemning the alleged human rights violations under Duterte. Last June, the administration suspended the termination of the VFA because of “political and other developments in the region.”

Roque said Duterte has also not issued a declaration on the Enhanced Defense Cooperation Agreement, which provides US troops access to Philippine military facilities.

“So pacta sunt servanda—treaties entered into in good faith will be complied with,” Roque said.

Roque said Duterte would keep an “open mind” on Biden, who served as vice president of former president Barack Obama. Obama has earned the ire of Duterte because of the former American leader’s criticisms of the Philippines’ controversial war on illegal drugs.

“Well, other than congratulating him, I think the President is keeping an open mind as he should. It will be a new start, but we have no prejudgments as far as President-elect Biden is concerned other than the position that we’re able and willing to work with the all leaders of the world,” Roque said.

Duterte repeatedly cursed Obama after the former president had expressed concerns over the deaths tied to the anti-drug campaign.

Roque could not say if Duterte would visit the United States before he steps down in 2022.

“I don’t know. Of course, that would depend on the invitation of president-elect Biden,” he said.

“Let’s cross the bridge when we get there po; but I don’t see any reason to decline (an invitation). But I will repeat, president-elect Biden is president-elect until January 20. His victory will have to be confirmed by the electoral college.”

Malacañang is also leaving it to the Commission on Elections (Comelec) to decide on proposals to implement an early and mail voting for the May 2022 polls. Comelec Commissioner Rowena Guanzon has expressed support for the mechanisms, which were adopted during the recently concluded US elections.

“We respect that recommendation coming as it does from a legal luminary within the Comelec and under the Constitution it is tasked of course with the supervision and conduct of elections,” Roque said.

“But I am not sure if there is a need to amend the Omnibus Election Code to include mail voting. We leave that to the wisdom of the Comelec,” he added.

A thread of major developments in the bilateral relations between the Philippines and the United States from April to December 2020. (Photo by AFP/Mark Cristino)

The US Embassy in the Philippines says the US government has turned over 150 laptop computers, printers, projectors and 80 sets of learning materials to the Department of Education through the United States Agency for International Development.

“This assistance is part of USAID’s Opportunity 2.0, a five-year, P1.9-billion ($37.5 million) project that works with DepEd, the Technical Education and Skills Development Authority, and local governments to support their ongoing programs to provide relevant education, employability skills, and work experience to out-of-school youth,” the US Embassy says in a statement.

The US government launches a new program to provide second-chance opportunities to at least 180,000 out-of-school youth in the Philippines.

Under the five-year “Opportunity 2.0” project, which is worth P1.9 billion, the USAID will partner with DepEd and TESDA to augment their ongoing programs that provide relevant education, employability skills and work experience.

“Through this new partnership, we can leverage a range of resources to maximize the potential of the Filipino youth, particularly those who are out-of-school or unemployed. With the right knowledge, attitudes, and skills, they will play a pivotal role in this great country’s growth and success over the long-term,” US Ambassador Sung Kim says.

US Secretary of State Mike Pompeo called Foreign Affairs Secretary Teodoro Locsin Jr. to discuss the recent change in US policy on maritime claims in the South China Sea, the US Department of State says.

The two foreign ministers also discussed US support for Southeast Asian coastal states upholding their sovereign rights and interests consistent with international law, as well as opportunities for further maritime cooperation between the two countries.

“The two secretaries also discussed the strong economic, security, and people-to-people ties that bind our two countries,” the statement read.

The US Army and Marine Corps service members, in partnership with the Philippine Air Force, Army and Coast Guard, deliver an additional P11.4 million ($236,000) worth of personal protective equipment and medical supplies to hospitals in 11 cities in the Philippines.

The latest donation brings the total assistance of the US government to the Philippines’ efforts against COVID-19 to P989 million (more than $20 million).

“This latest delivery of U.S. government assistance for Filipino frontliners in the battle against COVID-19 is a testament to our ongoing commitment to help the Philippines defeat the pandemic,” US Ambassador Sung Kim says.

The United States donates P14.8 million worth of personal protective equipment to the Philippine General Hospital and other COVID-19 treatment centers in the Philippines.

“This delivery of PPE demonstrates our ongoing commitment to the Philippines to stop COVID-19. During this month, which began with a commemoration of Philippine-American Friendship Day, we are honored to support our Filipino friends, partners, and allies with the PPE they need to assist communities confronting the pandemic,” US Ambassador Sung Kim says in a statement.

The latest donation brings the total US government assistance to the Philippines’ COVID-19 response efforts to nearly P981 million.