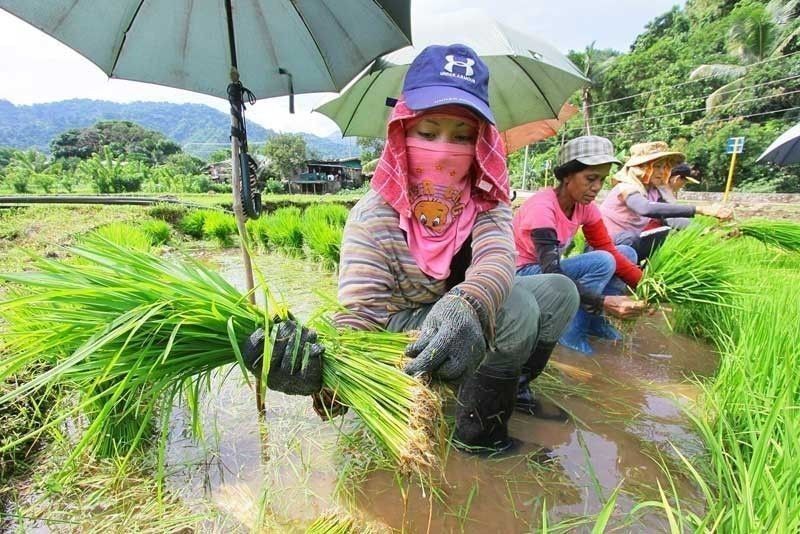 MANILA, Philippines — The Department of Agriculture has a total of P25 billion for two rice programs to boost the country’s sufficiency of the staple and augment the income of farmers and other stakeholders, but Sen. Cynthia Villar said yesterday the DA apparently has failed to disburse funds to implement the initiatives.

Villar, who chairs the Senate committee on agriculture and food, issued the statement after some groups blamed Republic Act 11203 or the Rice Tariffication Law – which also created the Rice Competitiveness Enhancement Fund (RCEF) – for the problems that farmers currently face.

She warned the DA, under Secretary William Dar, to drastically improve the disbursement rate of its annual budget, as well as implementation of the National Rice Program, especially with the slumping economy and successive natural disasters.

The senator said the fixation on putting the blame on RCEF and tariffication for the failure of the National Rice Program to meet its goals “is an attempt to muddle the issue and is being used by some vested interests who do not want to correct and empower the rice farmers.”

“The problem of rice farmers should not be blamed entirely on the RCEF. It has been just over a year for it to create such a huge impact, because the law was passed in February 2019 while the National Rice Program has been there since 1986,” Villar said.

“The National Rice Program is one of the banner programs of the DA, which focused on rice farming under the Office of the Secretary. It has been there since 1986 under six presidents,” she said.

RA 11203 was passed for the country to comply with its commitments to the World Trade Organization where rice imports were liberalized but imposed a 35 percent tariff for those coming from members of the Association of Southeast Asian Nations, among other provisions.

Villar earlier said in crafting the law, specifically the RCEF, the Senate specifically stripped the National Food Authority of its mandate to undertake imports, which senators suspect has upset corrupt NFA officials and unscrupulous rice importers.

She said Congress has appropriated P15.5 billion for the National Rice Program, which the DA classifies as subsidy to accelerate the adoption of modern rice technology toward increased yield, increase income and disaster risk reduction.

“However, this computation of allocation for rice through the years should have included the budgets for irrigation through the NIA averaging P31 billion a year and that of NFA which is subsidized yearly by P7 billion for the buffer stocking program in times of calamites, fortuitous events or shortfall in production,” Villar said.

She pointed out that the poverty situation in rural areas has not significantly changed during the past 34 years.

Villar said the rice tariffication law guaranteed the P10-billion RCEF funding for the program starting in 2019 with or without collection and this is in addition to and separate from the budget for the National Rice Program.

The RCEF assists rice farmers who will be negatively affected by the expected increase in the inflow of cheaper rice imports of similar quality into the country and make rice production in the country competitive.

She said the Senate made sure the RCEF allocation was itemized to lessen delays and red tape from the DA.

Of the P10 billion in 2021, P5 billion will disbursed by the Philippine Center for Postharvest Development and Mechanization in the form of machineries and equipment to farmer’s cooperatives and associations or to the local government units of rice producing towns with at least 100 hectares of rice farm lands; P3 billion in the form of quality inbred seeds given to farmers listed in the Philippine Rice Research Institute; P1 billion as credit facility with minimal interest available to rice farmers and/or their cooperatives divided equally through the Land Bank of the Philippines and Development Bank of the Philippines; P1-billion extension support for training rice farmers on quality inbred rice production, modern rice farming techniques, farm mechanization and technology transfer through the different accredited farm schools nationwide.

The senator said RCEF every year until 2024 is focused on the 55 rice producing provinces across the country, covering 947 municipalities.

In 2020, the Bureau of Customs reported a tariff collection of P3 billion – representing taxes collected from January to September 2020 – in excess of the P10-billion threshold set by the law.

The law also provides that collections in excess of P10 billion may be allocated to other programs on rice, including financial assistance to small rice farmers, during its first six years of implementation.

A joint Senate resolution proposes to use all rice tariff collections beyond P10 billion as financial aid to the farmers owning one hectare and below, numbering around one million rice farmers.