It was like taking a step back into the past, while taking a leap into the future.

The Department of Tourism (DOT) recently invited me to experience a “staycation” under the new normal at the Grand Hyatt Manila, which, under the leadership of GM Gottfried Bogensperger, is one of the few luxury hotels in Metro Manila accredited for the purpose. It was only the second time since the lockdown in March that I have set foot inside a five-star hotel. The first time was in a hotel in Makati. Lights were dimmed in the once brightly lit lobby. But the restaurant where we had lunch was bustling.

The Grand Hyatt Lobby was sparkling — just like old times. I felt a sense of déjà vu. 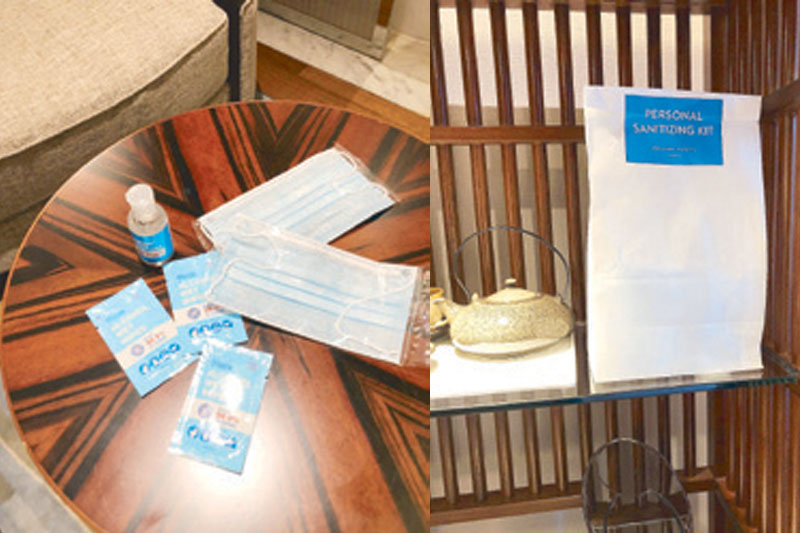 Each room has a personal sanitizing kit with masks, alcohol wipes, and a hand sanitizer

The difference was, in the past, you could avail yourself of valet parking and walk right in. But, due to safety protocols, valet parking is no longer allowed in the hotel — a good idea since one appreciated the fact that no one else touched the steering wheel and door handles of one’s car. It minimized the unknowns and the risks.

After parking, my husband Ed and I took the elevator to the lobby, where we were directed to a room that was set up for COVID-19 antigen testing conducted by the Manila Doctors Hospital. It is a requirement of the DOT that all guests who check in subject themselves to an antigen test on the day of check-in. I had an antigen test the day before (with negative results) for another event, but they were firm. No antigen test, no check in. This actually boosted my confidence for my first hotel staycation in eight months — the same way that after 9/11, stricter safety measures in airports gave me the confidence to fly again. The stricter, the better.

There was a family of “staycationers” with us in the testing room. They all tested negative and were allowed to check in. After they left, their seats were sanitized one by one.

Then came our turn. Our antigen tests resembled a swab test, and results were swift — in 15 minutes flat. We got certificates that we tested negative, which my husband held proudly like a diploma.

The Grand Kitchen overlooks the lobby.

I asked Grand Hyatt director of Marketing Communications Heidi Manabat what happens if a guest tested positive. She said the guest would immediately be isolated, and the Department of Health notified.

Then it was time to check in. There was a no-touch policy at the front desk, and room keys were placed in a tray by a gloved front desk manager.

Since we were only staying overnight, we had no need for porters to assist us.  Only four people are allowed per elevator, which, like other high-traffic areas, is cleaned hourly.

Then we beheld our room with a view. It was very modern, with sliding doors between the bathtub and the bedroom, so that if you wanted, you could soak in the tub while soaking in the view.

There was a personal sanitizing kit in the room that had facemasks, alcohol wipes, and a bottle of hand sanitizer.

It’s Christmas at the Grand Hyatt.

We were celebrating our wedding anniversary, so we were greeted by a basket of fruits, red velvet chocolate cake and a bottle of white wine (our favorite).

The Peak was 100 percent booked that night, so we had dinner at the Grand Kitchen. Every table was taken. We ordered a la carte, though some buffet stations — with protective transparent barriers — were open. In tables, social distancing was encouraged with places marked for each diner. The receptionists and waiting staff were grateful for each guest’s presence, and they showed it.

If anything, the pandemic, despite the pains it inflicted on many of us, has taught us to appreciate the other more, to never take one’s livelihood or liberties for granted. Either could be taken from you in the blink of an eye.

Steak at the Grand Kitchen.

After a hearty steak dinner and the most delicious lava cake with soft vanilla ice cream for dessert, Ed and I decided to take a walk to burn some calories. It was like strolling through an avenue in the First World. The sidewalk fronting the Grand Hyatt was wide, well-paved, tree shaded and well-lit. There were very few cars on the road parallel to it; the air was crisp and clean. I thought I was in Singapore.

We awoke to Joe Biden as the President-elect of the United States. Ed had an American breakfast, his favorite. We had room service, as we stayed glued to CNN. We were advised that for room service, the staff would simply knock on your door and leave the food trolley outside it.  No one is allowed into the room but its occupants.

All too soon, the staycation was over. When we descended to the lobby, its giant Christmas tree, shrouded the day before, was all lit up, as if bidding us a bright welcome and a cheery farewell.

It was a great way to cap a staycation that removed any psychological barriers to venturing out of the home. Home is sweet, but a staycation could be a welcome respite. A break from routine. A vote of confidence for the future that says, yes, we can still live our lives if we are careful enough.

It was a leap into the future because we saw what the future of hotel staycations was like: safety was paramount, but it didn’t rob one of the novelty and pleasure of a staycation in a luxury hotel like the Grand Hyatt.

(More than 7,200 hotels, resorts and other accommodation establishments (AEs) have been authorized by the Department of Tourism (DOT) to operate under different quarantine classifications and cater to different types of travelers, depending on their location and purpose.)