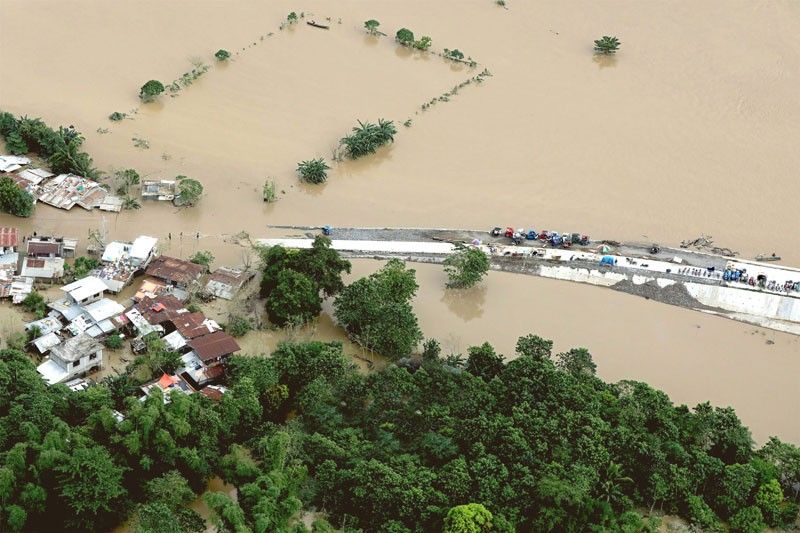 Rescue ops on as state of calamity declared

MANILA, Philippines — Coast Guard personnel and disaster teams scrambled to rescue thousands in Cagayan province caught by surprise by raging floods triggered largely by the release of water from one of the largest dams in the country.

The rush of water from Magat Dam as well as heavy rains brought by Typhoon Ulysses caused the Cagayan River to swell and overflow, killing nine people per initial report and prompting officials led by Gov. Manuel Mamba to place the province under a state of calamity.

“The provincial council approved it at 11 a.m.,” he told radio dzBB in Filipino. Isabela province was also placed under a state of calamity on Friday.

Uysses (international codename Vamco) was the strongest typhoon to hit the country this year. Dozens of towns in Cagayan region north of Metro Manila remain submerged, affecting thousands of families, some of whom fled to rooftops to escape two-story high floods, officials said.

Placing Cagayan under state of calamity is intended to fast-track relief operations for affected residents, especially in 24 of the 28 heavily flooded towns in the capital city of Tuguegarao.

Mamba said four of the fatalities were killed by landslide while two drowned. The other three, including a rescuer of the Bureau of Fisheries and Aquatic Resources, died from electrocution. Four other rescuers were injured from electrocution, he added.

At least 47,000 individuals from all over the province were rescued. Mamba said 70 percent of the evacuees were taken in by relatives and neighbors, while the remaining 30 percent sought refuge at evacuation centers.

He appealed for more assistance from the national government, saying they were overwhelmed by the sudden rise of floodwaters despite earlier preparations for Typhoon Ulysses.

“We need help, especially relief goods – from food to water,” he said over Teleradyo.

He also called on the Armed Forces of the Philippines (AFP) and other government institutions to send air assets, especially helicopters as well as watercraft, to help in rescue operations.

The flooding, which Mamba said is the worst to hit the province in years, was also caused by rainfall that washed down from the nearby provinces of Quiriino, Nueva Vizcaya, Ifugao, Kalinga and Isabela.

He said it was the first time that water level in the province’s gauging station at the Buntun Bridge reached 13.1 meters. The situation was aggravated by the release of water from Magat Dam.

“I hope the experience, disasters that we are going through right now, will give us lessons already,” he said.

“We believe it would take more than a week before the floods subside” if there is no further rain, Tuguegarao City Mayor Jefferson Soriano told dzMM radio.

Residents took to social media, posting photos and addresses with pleas for rescue. The hashtag #CagayanNeedsHelp was the top trending topic on Twitter with 2.03 million tweets.

“We’re already on the third day atop our roof. We need relief goods and clothing because we saved nothing,” Ramilo Lagundi, a resident of Tuguegarao City, told dzBB radio.

Lagundi said he was staying with hundreds of neighbors on rooftops.

The National Disaster Risk Reduction Management Council (NDRRMC) said a total of 308 barangays in 67 cities and municipalities in Region II reported flooding in their jurisdictions.

Mamba said they recorded flooding of up to 13 meters in some of their stations, an unprecedented height as the previous record was at 11 meters.

Almost on its third day, Mamba said flooding has not yet receded in some areas.

“We anticipated this but we did not anticipate how enormous the water would be… We prepared but this is worse than what we prepared for,” Mamba said at a briefing.

He said environmental degradation was the culprit for the heavy flooding which made the Cagayan River appear like an ocean.

“All the suffering now should serve as a lesson. It should open the eyes of the national government,” he added.

He said there should be a long-term plan for dredging projects and reforestation efforts along the river to prevent another catastrophic flood.

Fifteen municipalities were inundated in Nueva Vizcaya and five in Quirino province.

Isabela Vice Gov. Faustino Dy III said the damage to the province was due to the cumulative effects of typhoons Rolly, Siony, Tonyo and Ulysses in a span of 12 days.

“Such events caused heavy rainfall that brought rapid and extensive floodings in various areas in the province; countless houses, crops and farmlands were submerged, various roads and bridges became impassable, numerous establishments have closed operations and a myriad of Isabelinos are still being evacuated from their homes,” a resolution signed by 18 provincial board members and approved by Dy read.

Despite reports of heavy flooding in Cagayan, NDRRMC executive director Ricardo Jalad said the national government had dealt with the catastrophe fully prepared.

When asked if they had anticipated the extent of the flooding, Jalad said they did and that they relied and prepared based on flood and risk hazard assessments by other government agencies.

“Definitely, all the areas that got flooded were there. So yes, in answer to your question,” he told reporters.

The NDRRMC said it deployed 3,776 rescue personnel from the military, police, the Bureau of Fire Protection and the PCG.

The Armed Forces of the Philippines (AFP) has sent personnel and assets to aid in the search, rescue and retrieval operations in the region.

Over 90 search-and-rescue units of the Northern Luzon Command have been deployed in 12 provinces. Nolcom, led by Maj. Gen. Arnulfo Marcelo Burgos Jr.. said it has dedicated a C-130 transport plane and a C-295 aircraft for Cagayan relief operations.

The whole Joint Task Force Tala, composed of combined personnel from the 5th Infantry Division, the Naval Forces Northern Luzon, the Marine Battalion Landing Team 10 and Tactical Operations Group, have been deployed to aid in search and rescue operations in the provinces.

“All resources of these units are being used to rescue and provide relief to stricken individuals and communities in CAR and Region 2,” AFP chief Gen. Gilbert Gapay said in a statement.

The PCG, meanwhile, parried criticisms that it had been slow in responding to calls for rescue from troubled areas.

He said they rescued at least 272 residents from Tuguegarao, Claveria, Tumauini and Isabela. He admitted that they are having difficulty contacting their teams in flooded areas.

He said they have also deployed aerial assets of the Coast Guard Aviation Force (CGAF) to monitor and further assess the situation in the flooded areas.  – Romina Cabrera, Victor Martin, Robertzon Ramirez