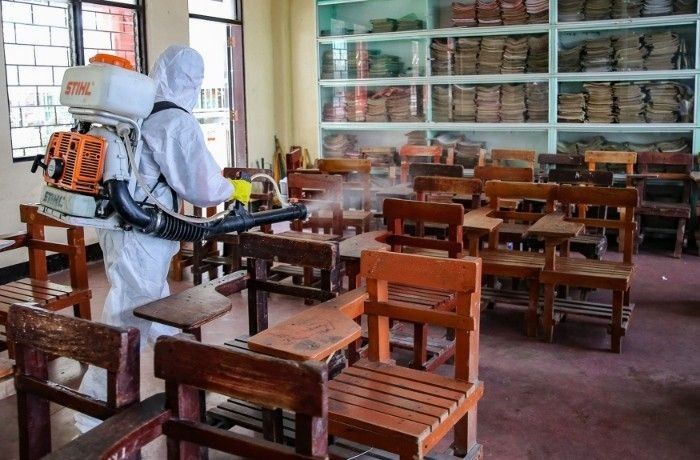 MANILA, Philippines — A private educators’ group on Wednesday stressed the need for tertiary institutions to develop a plan with local governments should the return of in-person classes cause a surge in coronavirus infections in their area.

Calls for the return of physical learning albeit with a limited number of students are growing, months since a new schooling setup at homes began due to the ongoing health crisis. The move to “blended” learning through online modules or lesson print-outs has been hounded by difficulties, as officials admit that they too are still adjusting.

Lawyer Noel Estrada of the Coordinating Council of Private Educational Associations said contingency measures should involve identifying which facilities students will be brought to as well as other adjustments.

“The coordination between local governments and schools will be crucial for an immediate response should a resurgence happens” he told DZMM’s Teleradyo in Filipino.

Resuming on-site classes in universities would put to test cities and provinces’ ability to carry out the effort for millions of students in the tertiary level, not counting yet those in basic education.

In the National Capital Region alone, there are 344 colleges and universities where over 662,000 students are enrolled in the last academic year, per statistics by the Commission on Higher Education.

“We know that the readiness of each local government unit varies, so that should be a big consideration in making a decision, their role in this,” Estrada added.

Education-related government agencies have been told to consider the resumption of in-person classes, but officials have always said that the final word will come from President Rodrigo Duterte, who ordered that no physical learning take place until a vaccine for COVID-19 arrives.

CHED Chairman Prospero de Vera had said that the body is formulating guidelines to allow limited physical learning for universities which will pass inspection, per a report by ABS-CBN News on Tuesday.

Estrada said part of Cocopea’s recommendation to CHED and the coronavirus task force is making in-person classes optional and for school administrators to make the call on whether to hold them or not.

This, he said, is targeted to begin by January 2021, when the academic year’s second term begins.

“If it will be permitted, it will be based on schools’ decision in consultation with their students,” he said. “As early as now we are asking that the guidelines be finalized so schools can get in touch with their stakeholders.”

The group also thumbed down the possibility of requiring students to undergo swab and other COVID-19 tests, saying it may be “prohibitive” as screenings come at a cost.

“If we’re not requiring that for all industries and sectors, why would we require that for education?” Estrada explained. “There should be a triggering mechanism before they have to be tested…otherwise testing facilities could be overwhelmed as in HEIs alone we’re already 4 million.”

President Rodrigo Duterte has yet to give his stand on the issue — but both CHED and the education department said they will make proposals for his approval on the matter.

His interior chief, Eduardo Año, has warned against rushing to a decision as he asked who would take responsibility should allowing physical classes again result in students being infected.

Health Secretary Francisco Duque III has said that he is for the move but only in areas with low to no coronavirus cases at all, which he said, would mean that only the Batanes province would be allowed.