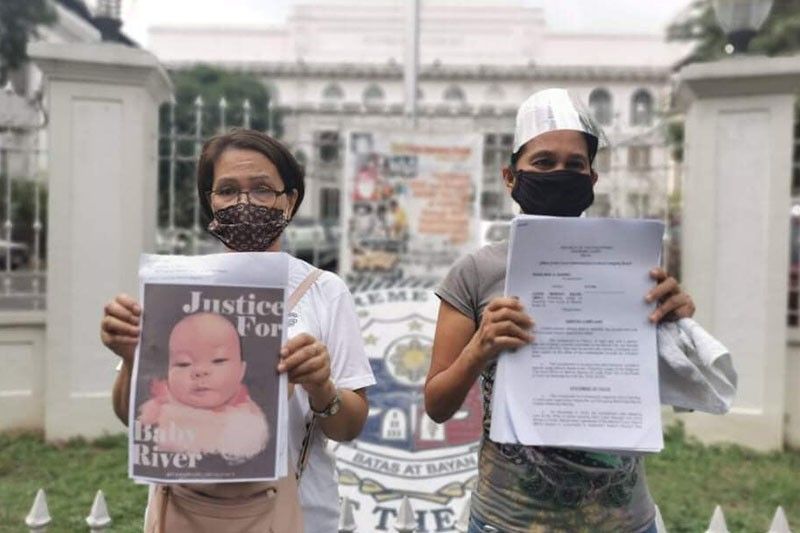 MANILA, Philippines — Jailed activist Reina Mae Nasino has asked the Supreme Court’s Judicial Integrity Board to dismiss Manila court judge Marivic Balisi-Umali, over her “conscious indifference” on her case that resulted in the death of her three-month old baby.

“The respondent judge acted with conscious indifference to the rights of the complainant and her co-accused. Now, the complainant is bereft of a child,” Nasino, through her counsels from the National Union of People’s Lawyer, said.

The NUPL on Friday filed a 44-page complaint against Umali, presiding judge of the Manila Regional Trial Court Branch 20 before the JIB, the panel created to act on administrative complaints or disciplinary actions against justices of lower courts and first and second level courts.

Baby River died on October 9 without ever reuniting with her detainee mom. They were separated by the Manila court when the infant was just a month old.

Judge Balisi-Umali handles the illegal possession of firearms and explosives case filed against Nasino and two others. The complaint has been re-raffled to a different judge after she granted the joint motion seeking her inhibition.

But the lawyers said her recusal from the case is not enough, but she should also be made accountable for her “unjust interlocutory orders that enabled the continuing violation of the complainant’s constitutional rights and gave way to the forcible weaning of her newborn child, which led to her serious illness and eventual demise.”

“Baby River’s death is on her doorstep,” they added.

Balisi-Umali ordered the separation of Nasino and her then one-month-old baby as it gave weight to the letter submitted by Jail Supt. Ignacia Monteron, officer-in-charge of the Manila City Jail Female Dormitory, who said that they have no facility as a nursery for newborn babies.

The NUPL said they and Nasino were not furnished with a copy of Monteron’s letter to the court.

They added that when Balisi-Umali issued the order granting their motion for inhibition, the judge accused Nasino’s lawyers of committing falsehood to the court.

The judge noted that the lawyers asked that Nasino be allowed to stay with her baby for a year to breastfeed River, but the Manila City Jail Female Dormitory officer had told the court that the baby was being bottle fed.

The NUPL said that Monteron lied when she told the court that River was not being breastfed while inside jail. They said Nasino had been giving her baby formal milk on top of her breastmilk.

“Unfortunately, Judge Balisi-Umali unilaterally believed hook, line and sinker what Monteron said, without so much as any clarification or confirmation from the defense, even if the complainant and the undersigned counsels were always present during hearings,” they said.

Balisi-Umali also never asked Nasino about the claims of the jail officer even though she was present during hearings. Her lawyers were not asked about it too.

“Thus, Judge Balisi-Umali did not only display manifest partiality against the complainant and her co-accused, she also displayed unbecoming behavior toward their counsels,” her lawyers said.

Gross ignorance of the law

The lawyers also accused the judge of gross ignorance of the law, particularly of Republic Acts 7600 and 10028, on the promotion of breastfeeding.

They added that the Bangkok Rules holds “decisions to allow children to stay with their mothers in prison shall be based on the best interests of the children.”

The NUPL said the judge “misapplied or even ignored” this mandate as no explanation was made how the separation will serve the best interests of Baby River and whether this was done in accordance with relevant laws.

“The premature separation of baby River from the complainant was clearly not in her best interest. In fact, it is cruel, heartless, and serves no purpose, especially amid a pandemic, when the complainant’s breastmilk would have provided baby River her much-needed protection from life-threatening diseases,” they told the board.

The lawyers also said Judge Balisi-Umali made a misrepresentation when, in her ruling, she only quoted part of the BJMP circular that states that a baby born in detention may stay with the mother for not more than a month. They pointed out that this was succeeded with a caveat that the period may be extended based on a recommendation of nurse or medical personnel and the best interest of the child.

Nasino and her co-accused, Ram Carlo Bautista and Almo Moran, also said judge exhibit “inexplicable skepticism” towards them when she repeatedly refused to subpoena records for the application of search warrants that was implemented and resulted in their arrest. When the subpoena was issued, it was already too late.

They said the judge upheld the validity of the search warrant without even seeing the records of application.

“At the same time, the presumption of regularity cannot cure the outstanding issue of probable cause in light of the irregularities on the face of the search warrants and the accused’s consistent averments that they were served in frame-up,” they added.

The NUPL stressed: “Therefore, the respondent’s dismissal from the service is imperative. Even if this will not bring back Baby River’s life or fill the void that she left in her mother’s heart, it will relieve the bench—and the public—of a magistrate who has lost the requisite competence, integrity and impartiality that are fundamental to her office.”