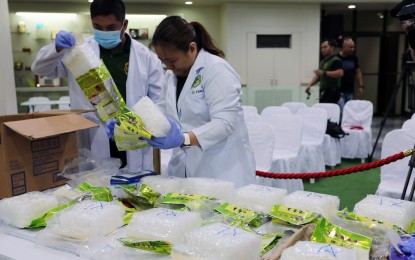 MANILA – The Philippine Drug Enforcement Agency (PDEA) on Wednesday questioned the basis of the report of the International Criminal Court (ICC) citing a “reasonable basis” to believe that crimes against humanity have been committed under the Philippine government’s anti-illegal drug campaign.

In a statement, the agency said the findings of the office of ICC Prosecutor Fatou Bensouda claiming that the campaign against illegal drugs of President Rodrigo Duterte involved acts of murder, torture and the infliction of serious physical injury and mental harm is “unfair, unjustifiable and one-sided”.

“PDEA remains skeptical on how the ICC came up with their findings solely on the basis of open-source information. Like all other well-founded reports, the ICC report should show proof and undergo the standard validation and vetting process before arriving at any firm conclusions,” it said.

The country’s prime anti-narcotics agency added that the ICC should have waited for the results of the formal investigation conducted by the Philippine government.

“The ICC should have waited for the release of the report of an inter-agency panel created by the Department of Justice (DOJ) to investigate the apparent drug-related killings, rather than issuing general statements that are yet to be proven without the aid of a formal and local investigation,” it added.

It added that the resolution of the United Nations Human Rights Council (UNHRC) issued in October offering technical assistance to Manila in boosting its human rights protection and accountability measures rather than launching an independent probe proves that there is no enough proof that extra-judicial killings exist in the Philippines.

PDEA also expressed hope that the matter would not merit an open investigation of the tribunal.

“PDEA is optimistic that the ICC judges will decide against pursuing an open investigation into the situation in the Philippines predicated on the principle applied on the previous rulings of its pre-trial chamber due to the absence of cooperation from the accused country, where the ICC has territorial jurisdiction,” it added.

President Duterte, PDEA said, does not recognize the ICC’s jurisdiction over the country following its withdrawal from the Rome Statute that created the international tribunal.

“Considering there is an absence of jurisdiction, it stands to reason that any ICC rulings are not enforceable in the country,” it added.

The Philippines officially withdrew its membership from the ICC on March 17, 2019, or exactly a year after it revoked the Rome Statute, a treaty that created the international court on Nov. 1, 2011. (PNA)