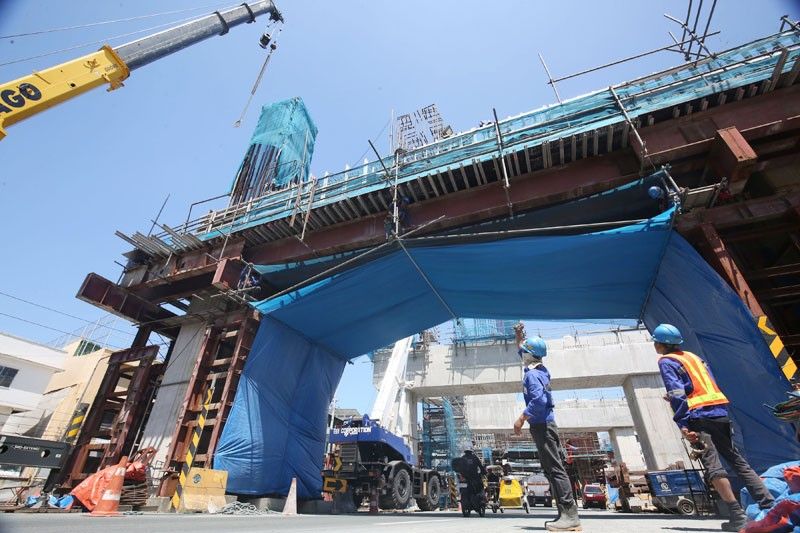 Government spending pullback brings with it the entire economy

MANILA, Philippines — The Duterte administration’s hesitation to deliver a fiscal bazooka to the economy is showing, derailing even the much heralded infrastructure program and exhausting private sector confidence to spend for a convincing bounce-back.

Government final expenditure, a measure of state spending, grew 5.8% year-on-year in the third quarter, sharply slowing down from 21.8% annual growth in previous 3 months and the weakest since the first quarter of 2017, data from Philippine Statistics Authority showed.

The impact elsewhere was severe. Government construction activity, just when infrastructure spending should be picking up, slumped 28.1% year-on-year, the weakest since second quarter last year when the budget was held up and prevented new spending. Construction by private firms sank 38.7% on-year in third quarter, the worst on record.

That state disbursements are weakening raises serious concern on a government recovery strategy that largely hinged on how quick capital outlays can be completed. Spending problems were typical even before the pandemic struck, but the inability to surmount them during these hard times paints a bleak picture for the entire economy.

“Government vowed to get (Build, Build, Build) back on track before the year end, however it doesn’t look like there’s much momentum building as construction, both private and public, remain in low gear with the economic recession,” Nicholas Antonio Mapa, senior economist at ING Bank in Manila, said in an e-mail.

But adding to these traditional problems was an unexpected hold-up from foreign donors that fund large-scale infrastructure projects. “Some of them were affected by dispatch of experts from foreign countries because of travel restrictions,” Chua said in an online briefing.

It was unclear how many projects are affected by this scenario, but 50 big-ticket projects worth P2.26 trillion under “Build, Build, Build” program are funded by official development assistance (ODA), and while they are at varying levels of development, each would require people from lending countries like China and Japan to move forward.

Terry Ridon, convenor of Infrawatch PH, a non-government organization monitoring infrastructure projects, the problem gets messier if foreign workers are added into the mix. “Given the issue right now on foreign workers, there is a possibility that projects are not moving because we are waiting for foreign laborers to come in,” Ridon said in a phone interview.

But government is not limited to ODA to spend, and Mapa believes the problem all boils down to President Rodrigo Duterte’s economic managers depriving the economy of a fiscal shot in the name of controlling the budget deficit already poised to hit record levels this year.

Chua once again defended the government’s position, saying that instead of relying on the national budget to do the work, a “package” of measures had been prepared, including bills that would lower corporate income taxes to benefit companies, as well as a vehicle for banks to offload their bad loans so they can lend.

The only problem is these measures remained stuck at the Senate for months, and government appears to have no contingency in place to soften the blow of a further pushback. “I believe they have enough time to pass the budget and 3 other bills…even at the last minute, the Senate and the Congress are able to deliver so we will be hopeful for that,” Chua said.

Yet the weakening economy can no longer wait. While business had reopened and consumption have resumed, the private sector is following the government’s lead on pulling back in spending. “Private sector partners may also be wary to push through with big ticket items given concerns on the current trajectory of the economy,” Mapa said.

“Prior to the pandemic, there was a lot of buzz over growth potential for the Philippines but now that all comes into question as we remain mired in a recession,” he added.