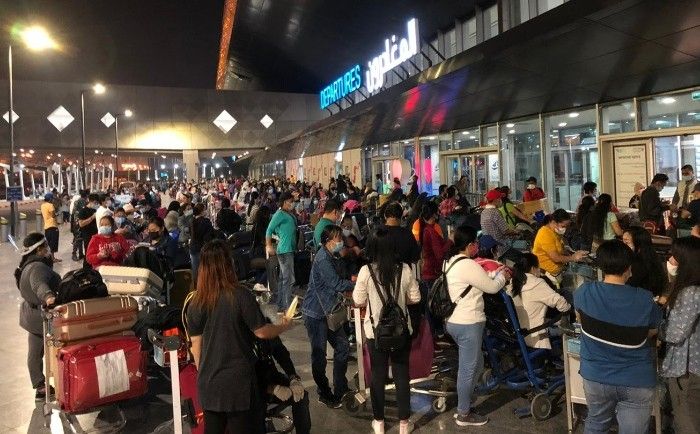 MANILA, Philippines — A Filipina domestic worker who won a long-running rape and frustrated murder case against a Kuwaiti cop is finally back in the Philippines, the Department of Foreign Affairs confirmed Wednesday.

While the DFA referred to her only as “Marissa,” a separate statement from the Department of Labor and Employment released Tuesday identifies the domestic worker as Marites Torijano.

DFA said the 36-year-old Torijano “joined the Philippine Embassy in Kuwait’s 20th repatriation chartered flight to Manila on 29 November 2020, coinciding with the Philippine commemoration of the 18-Day Campaign to End Violence Against Women (VAW).”

“The Embassy is glad that Marissa will finally close this difficult and painful chapter of her life, and will embrace her 14-year-old son once again after years of working overseas. I pray that with her second life, Marissa’s story and bravery will continue to serve as an inspiration to others in fighting for what is right and just,” Philippine Ambassador-designate to Kuwait Mohammed Lomondot said.

Torijano was first deployed to Kuwait in September 2006 by Zontar Manpower Services Inc, according to Labor Attaché Nasser Mustafa. He added that while she was originally deployed as a domestic worker, she was later transferred to work in a dress shop located in Farwaniya.

“While her residence visa was still for renewal by her employer, she was caught by a Kuwaiti policeman in September 2012. Instead of bringing her to the police station, she was driven to a dark dessert in South Surra where she was raped inside the police patrol car and was stabbed on the neck and back,” DOLE said.

“Torijano managed to crawl by the roadside where she was found by a passing car and was brought to Mubarak Hospital,” the agency added.

In June 2014, after two years in trial, the Kuwaiti traffic police officer, identified by the DFA as Lance Corporal Yahiya Mohamad Ahmad Abdullah, was found guilty by the Court of First Instance and sentenced to death by hanging. However, the sentence was commuted to life imprisonment by the Court of Appeals after it was appealed by Abdullah’s legal counsel.

According to the foreign affairs department, the Kuwaiti Ministry of Interior, Abdullah’s employer, later paid the civil compensation for Torijano upon order of the court.

DOLE called Torijano the longest staying distressed worker in the government’s half-way home in Kuwait, having spent eight years at the Migrant Workers and Other Filipino Resource Center while awaiting the outcome of her complaint. DFA said she also spent some time in its Assistance to Nationals center.

In May 2018, the Philippines and Kuwait signed a Memorandum of Agreement on the Employment of Domestic Workers, which sought to protect Filipino migrant workers in the Gulf state.

Domestic relations between the two countries were strained weeks before the signing of this agreement with several incidents of abuses or deaths of Filipino workers. President Rodrigo Duterte even banned the deployment of Filipinos to Kuwait due to these reports.

After this incident, the Philippines and Kuwait signed an agreement allowing Filipino domestic workers to be allowed to use their mobile phones and for their passports to be deposited at the Philippine embassy for safekeeping instead of being kept by their employers.