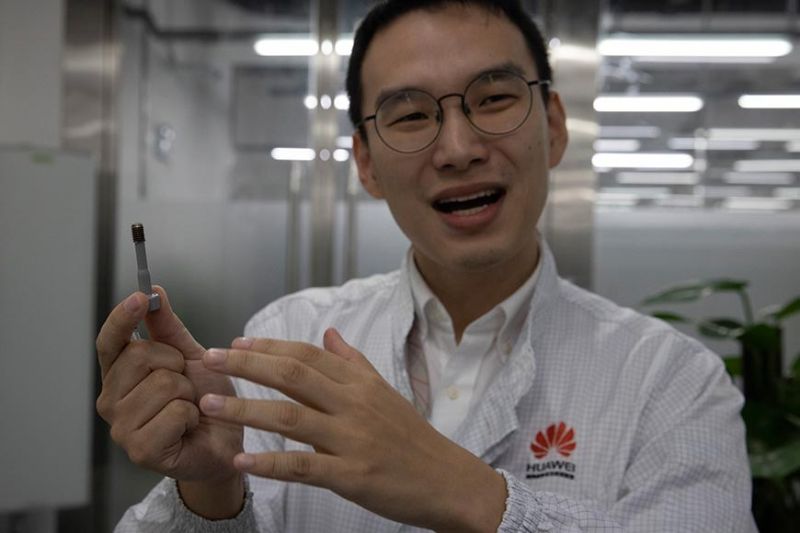 SHENZHEN, China — Long before President Donald Trump threatened to cut off Huawei’s access to U.S. technology, the Chinese telecom equipment maker was pouring money into research that reduces its need for American suppliers.

Huawei’s founder said instead of crippling the company, the export curbs are making it a tougher competitor by forcing managers to focus resources on their most important products.

Little-known to Americans, Huawei Technologies Ltd. is the No. 2 smartphone brand worldwide and the biggest maker of switching gear at the heart of phone networks. Its equipment is used by 45 of the 50 biggest global phone carriers.

Huawei is a pioneer in the emerging field of next-generation, or 5G, telecoms. It promises not just faster internet, but support for self-driving cars and other futuristic applications. That fuels Western security concerns and makes 5G politically sensitive. The U.S. claimed the company might aid Chinese spying, though Huawei denies that and American officials have provided no evidence.

Huawei needs some American innovations, especially Google services used on Android phones. But, industry experts said the company is increasingly self-sufficient after spending 485 billion yuan or $65 billion on research and development over the past decade.

“They have a strategy to become completely independent from U.S. technology. And in many areas they have become independent,” said Bengt Nordstrom of North Stream, a research firm in Stockholm.

Ren Zhengfei, who founded the company in 1987, acknowledged in an interview that phone sales will suffer if access to technology, including Google services for smartphones, is disrupted by the addition of Huawei to a U.S. Commerce Department “entity list” that requires it to get government permission to buy American technology. Phone sales could be $20 to $30 billion less than forecast over the next two years, Ren and other executives said, but the company will survive.

“When the entity list came out, they hoped Huawei would die,” Ren said. “Not only did Huawei not die, it is doing even better.”

The company was added to the entity list on May 16, but already has been granted two 90-day extensions after American suppliers of processor chips and other technology warned they stand to lose billions.

Intel Corp. and other vendors that industry analysts said were paid a total of some $12 billion last year by Huawei have asked the Trump administration for permission to continue sales.

The biggest potential American blow to Huawei would be the loss of Google services that are standard features on Android-based phones. Huawei could use Android, which is open-source, but would lose Google’s music, maps and other applications, making it harder to compete with Samsung, the No. 1 smartphone brand.

“Nobody is going to spend money to buy a premium Huawei phone if it doesn’t have maps, YouTube, Google Play,” said Samm Sacks, an expert in Chinese digital policy at the New America think tank.

Ren said he wants to keeping using Android and working with American suppliers. But as a fallback, the company unveiled its HarmonyOS operating system in August and said Android phones can be switched to the new system in days if necessary.

Huawei, with $107 billion in 2018 sales, spent 100 billion yuan ($15 billion) on research and development last year, more than Apple or Microsoft. It has 76,000 engineers and other researchers at its sprawling, leafy headquarters campus in southern China and in Silicon Valley, Russia, India’s Bangalore, and other industry centers.

In the AP interview, Ren made a sales pitch to Washington: To ease security fears, Huawei will license 5G technology to American developers.

“I am open to the possibility of a paid transfer of 5G technology and production techniques to U.S. companies,” Ren said.

That is a long shot, given Washington’s pressure on phone carriers to shun Huawei. But, it would increase the company’s presence in 5G and generate license fees and demand for its products.

Huawei is on a global charm offensive, trying to convince European and other governments there is no truth to U.S. claims it is a security risk.

Washington has been lobbying European governments to exclude Huawei from 5G networks but Germany, France, and Ireland said they have no plans to ban any supplier.

Early on, Huawei faced complaints it copied technology from industry leaders. It temporarily pulled out of the United States in 2003 after admitting it copied Cisco software in routers.

But the company is catching up with Western developers, industry experts said. Huawei said it has collected $1.4 billion since 2015 in license fees from other companies that use its technology.

Huawei is, along with Ericsson and Nokia, a leader in developing network equipment to support 5G. The company said it has invested $4 billion in that since 2009, produced its own equipment, and used no U.S. technology.

“It’s almost all our own components,” Ren said.

Huawei also is among hundreds of companies that are creating 5G phones and other devices, making it the only competitor to straddle the two markets.

“They are very well positioned to develop 5G — at least the same level as their competitors,” Nordstrom said.

That, plus growing use of networks to link fighter planes and other military hardware, raises the potential cost of security failures and the political sensitivity of 5G.

Huawei bills its Mate 20 X smartphone, which went on sale in China in August, as the first with 5G capability.

It uses Kirin 980 and Balong 5000 chips from Huawei’s HiSilicon subsidiary instead of chips from Qualcomm or Intel. HiSilicon also makes Kirin chips for lower-end phones and Kunpeng chips for servers.

Huawei launched its Ascend line of processor chips in October for artificial intelligence. The 310 for self-driving cars and the more powerful 910 are based on architecture from British chip designer Arm Ltd.

Arm said in July it might be forced to cut ties with Huawei because it does some research in the United States. That highlighted the challenge of finding suppliers with no U.S. links.

Arm said in an email it is “actively communicating” with the U.S. Commerce Department about the relationship. (AP)