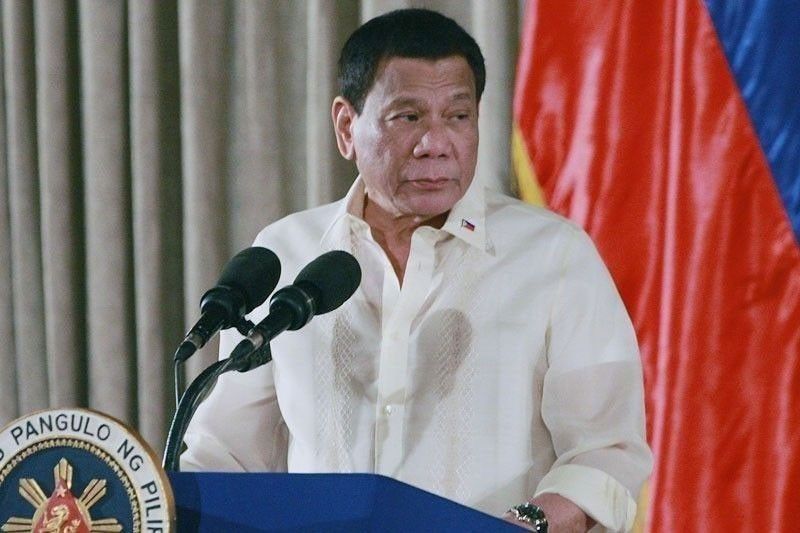 MANILA, Philippines — President Duterte only wants the so-called legal fronts to renounce armed violence, Malacañang said yesterday, as it advised progressive lawmakers to “get real” and admit their ties with the Communist Party of the Philippines (CPP).

Presidential spokesman Harry Roque said that while mere affiliation with the CPP is not a crime, the party cannot be separated from the New People’s Army (NPA), the armed wing of the communist rebels.

“If it may not be a crime, but (the legal fronts) have consistently been lying. They have been saying that the legal fronts have nothing to do with the CPP. For me, hello, since the time of (the late president) Cory (Aquino), being a member of the CPP has been decriminalized. Come out with it and admit, ‘Yes, we are members of the Communist Party of the Philippines,’ ” Roque said at a press briefing.

“But the crime is the New People’s Army because that is a crime of rebellion, taking up of arms against the government, killing civilians and soldiers. So the problem with them is you cannot separate the CPP from the NPA, that’s why their statements are always signed CPP-NPA. That’s illegal. The fact is if you are a member of CPP, you can be legal but you have to renounce the use of arms,” he added.

Lawmakers who belong to progressive party-list groups should stop their “lies” about red-baiting, and that they could be “red” without necessarily endorsing the use of arms, according to the Palace spokesman.

“They are good in parliamentary politics, they are elected and they have the most number of representatives among party-list groups. Why not renounce the use of arms? That’s the only thing being asked,” he said.

“But as long as they do not renounce it and while they are taking part in the use of violence and arms against the republic, that’s a crime. But first and foremost, let’s be honest,” he added.

Asked to react to Bayan Muna party-list Rep. Carlos Zarate’s claim that Duterte’s tirade against progressive groups was just a diversionary tactic, Roque replied: “Get real. That’s all I can say and I have to say to him.”

“That’s why the appeal of the President, of the (secretary of national defense), is for them to renounce the armed struggle, then there would be no problem,” he added.

During a meeting of the government’s pandemic task force last Monday, Duterte said parties that belong to the House Makabayan bloc and progressive group Bayan are not being “red-tagged,” but are being identified as members of a “grand conspiracy” under the National Democratic Front.

The NDF used to represent the communists in the peace talks with the government.

“The Armed Forces of the Philippines (AFP) is very correct. You are being identified as the members of the communists,” Duterte said.

“We are not tagging you. We are identifying you as communist. It’s a grand conspiracy. So the liability of a mere soldier is the liability of all the members of the organizations, those fronts… You are friends with the NPA, you are co-conspirators. You are a communist. I have known that for a long time,” he added.

The President also lambasted CPP founder Jose Maria Sison as “bobo (stupid)” and claimed that Zarate reminded him of dog excrement. He also mentioned the death of Bayan Muna Rep. Eufemia Cullamat’s daughter Jevilyn, who was killed in a clash with the military in Surigao del Sur last Saturday.

He added that lumads or indigenous tribes would become extinct if the clashes continue.

Meanwhile, Cullamat yesterday filed a case before the Commission on Human Rights (CHR) against the AFP for “desecrating” the cadaver of her slain daughter.

In a three-page letter-complaint, the left-wing militant lawmaker asked CHR chairman Chito Gascon to conduct a formal investigation on the matter for purposes of finding culpability on who can be held accountable for desecrating the remains of the 22-year-old Cullamat.

She categorically stated that what the military did was a violation of the International Humanitarian Law (IHL) or Republic Act 9851, that the remains of one killed in armed conflict should be respected.

Her colleague in the Makabayan bloc, Rep. Arlene Brosas of women’s group Gabriela, also criticized Duterte’s “useless tirades, incoherent rants” against them, saying it is just a “pathetic ploy to mask the government’s inaction against the worsening crisis.”

“Duterte proves that providing socioeconomic aid and programs amid the pandemic and series of typhoons is the least of his priorities. Accusing us of being fronts of the CPP-NPA will not change the fact that his incompetence has intensified the crisis we are facing today,” Brosas said.

“This is also a direct threat coming from the Commander-in-Chief. With these baseless accusations, Duterte is playing judge, jury and executioner by putting the law into his own hands,” she added, emphasizing that the President “practically gave the green light to more extrajudicial killings, human rights violations and illegal arrests not just against activists but those who are seeking reforms in governance through parliament and airing legit criticisms.”

At the same time, Zarate denied that they are communist rebels out to destabilize the government, noting that Duterte is just resorting to “diversionary tactics.”

The lawyer-legislator added that they are “legitimate, registered party-list groups” taking part in the “parliamentary arena” and that they are part of the 18th Congress (July 2019-June 2022).

In a related development, a self-confessed former assassin of the NPA admitted killing at least seven civilians identified as military assets while they were in disguise as either military or policemen to make the people angry with the government.

Self-confessed former NPA-Sparrow Unit member James Dorimon told the Senate committee on national defense and security, peace, unification and reconciliation chaired by Sen. Panfilo Lacson that the killings were directives from high-ranking officers of the CPP-NPA-NDF.

During the third and last day of the hybrid hearing at the Senate, Dorimon said at age 14, he was recruited by the movement, but he had decided to return to the fold of the law upon seeing and realizing all the wrongdoings of the organization.

Without disclosing the date he joined the group, he said he became a member of the NPA’s Sparrow Unit, the liquidation squad of the group.

“When I was in the Partisano unit, I saw the mistake that should not have been made. The CPP propaganda is for our development, but what I saw was murder. Because we are the ones they order to kill,” Dorimon said at the hearing.

The directive, he claimed, came from a certain Ramon Villar, alias Ka Dodo, and Charete Amacan.

“We were instructed to kill people whom they said were obstructing the movement’s objective or for simply being military assets that need to be knocked down. That’s what we do,” Dorimon said.

He added that they carried out the assassination while they were wearing either police or military uniforms as part of their propaganda to get people angry at soldiers and police officers.

Dorimon said he decided to go back to the fold of the law as he wants peace and prosperity in the society.

“So I am here now to let everyone know that we need to end what CPP-NPA-NDF is doing,” he added.