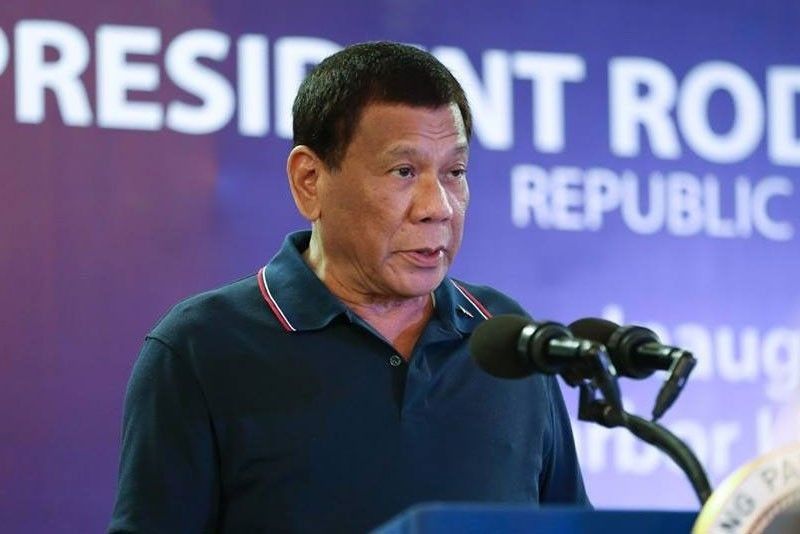 Duterte on Laguna mayor’s slay: Narco list not mine

MANILA, Philippines — President Duterte on Monday washed his hands of the killing of Los Baños Mayor Caesar Perez even as he justified his decision to reveal the names of officials implicated in the illegal drug trade.

Perez, who was shot dead inside the municipal hall complex on Dec. 3, was included in Duterte’s narco list.

The slain mayor’s eldest son, Aldous, is convinced that the incident may be related to his inclusion in the list.

During his weekly public address, Duterte said the narco list does not belong to him and was merely sent to him by security forces.

“First of all, I’m sorry that your father died the way it happened. The list is not mine. It’s a collation, all the intelligence report of drug enforcement agencies and the intelligence of the military and police,” the President said.

Duterte, whose drug war has been criticized by human rights advocates here and abroad, said he does not know Perez.

“Well, it’s just a cursory reading but I did not memorize the people on the list. I’m sorry if your father was there. But really, most of those on the list are really into illegal drugs. Your father might be an exception,” the President said.

“If you believe that he was not guilty or liable of anything, well, it’s good. But the problem (is) his name was on the list. And mind you, with regard to the deaths, you will just have to look for the killers. They’re not in my office,” Duterte added.

The President also parried criticism that he endangered the lives of people on the narco list. He said the names have to be read to “prevent their ascension to public office.”

Despite his inclusion on the list, Perez was reelected during the 2019 mid-term elections.

The gunman who killed Perez is “very proficient” and could be a member of a gun-for-hire ring, Calabarzon police director Brig. Gen. Felipe Natividad said.

Natividad said the assailant managed to shoot Perez multiple times from a distance of around 26 meters. He said investigators were able to measure the distance after inspecting the crime scene.

Police said it is unclear if the suspect used a sniper rifle similar to the assassination of Tanauan, Batangas mayor Antonio Halili in 2018, where the shooter was about 70 meters away from the target.

A medico legal report showed that Perez suffered gunshots to the head, chest and right shoulder.

The three metallic fragments recovered at the scene were not enough to determine what firearm was used in the killing, Natividad said.

Natividad said they have yet to determine if Perez’s murder was politically motivated or related to his supposed links to drugs.

Supporters of Perez trooped to the municipal hall of Los Baños yesterday to view his remains.

They sought justice for the slain mayor.

Duterte also reacted to the statement of the wife of former Iloilo City mayor Jed Patrick Mabilog, who has also been accused of involvement in drugs.

Mabilog’s wife Marivic asked Duterte to “move on” and to “get a life” after the President mentioned in an address that Mabilog had been dismissed from the service.

“Look, it is not my fault that your husband’s name appears on that list. It’s not my list. Now, there is no such thing as I have to move on because it’s a constant vigilance,” Duterte said.

The President reiterated his warning against drug traffickers to stop their unlawful activities.