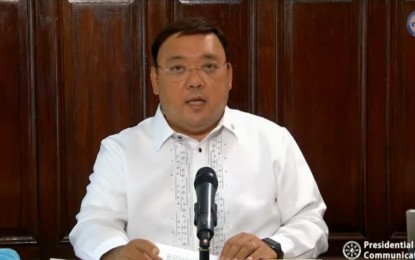 MANILA – Malacañang is urging the Department of Social Welfare and Development (DSWD) to ensure the protection of the one-year-old child of Amanda Echanis, a suspected New People’s Army (NPA) leader who was arrested in Baggao, Cagayan last Wednesday.

River, who was separated from her mother after birth, died due to acute respiratory distress syndrome last Oct. 9.

“Well, sana po ay hindi na maulit iyan (I hope it won’t happen again). But I’m calling upon the DSWD to take steps to ensure that the welfare of the child will be protected,” he said in a press briefing from Palawan.

Roque, a lawyer, said it is the government’s mandate to provide due care to children.

“Hindi po kasi dahilan iyon na palibhasa may anak ka, hindi ka makukulong at hindi ka masa-subject sa proseso (Having a child does not exempt you from being detained or subjected to process). But it is always the rule that the government will take steps for the best interests of the child,” he added.

In a TV interview, Philippine National Police chief Gen. Debold Sinas said it was Amanda who insisted to bring her baby to the police station after she was arrested.

He, however, said social workers were present there to assist Amanda and her child.

Meanwhile, Sinas denied that the firearms and explosives seized during an operation that led to the arrest of Amanda were planted.

“’Yung sinabi nila na planting (of evidence) hindi po totoo yun kasi papaano ka mag-plant ng mga baril na ‘to mga bago, mga high-caliber mahirap po mag-plant noon sa bahay n’ya yun eh (What they claim as planting of evidence is not true because how would you be able to plant these new and high-caliber guns. It would be difficult to do that in her house),” he said.

Amanda is the daughter of Randall Echanis, Anakpawis chairperson and National Democratic Front of the Philippines peace consultant. The latter was shot and killed in an apartment in Quezon City last Aug.10.

She is the finance officer of the West Front-Komiteng Probinsya ng Cagayan (KOMPROB) of Cagayan Valley Regional Party Committee of the NPA operating in Cagayan, authorities said. (PNA)