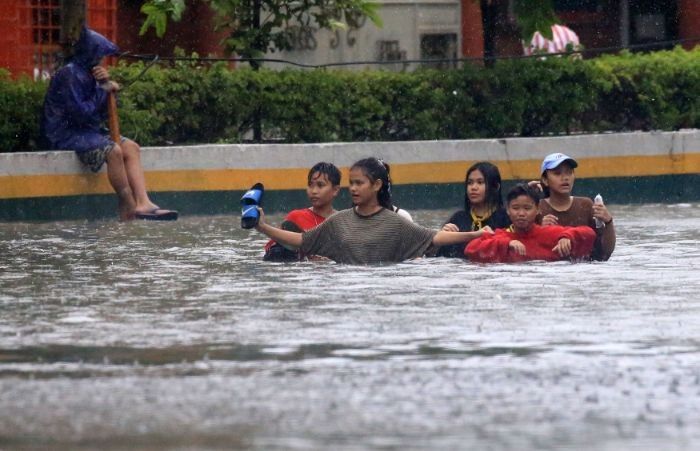 DILG: 14 dead, 3 missing, more than 345k in shelters due to Typhoon Ulysses

MANILA, Philippines (Updated 11:55 a.m.) — Typhoon Ulysses, which battered the capital region and parts of Luzon this week, has so far left 14 dead, three missing, and more than 345,000 in evacuation centers, the interior department said Friday.

The military and the national police, however, logged significantly higher death tolls and more persons missing.  Gen. Gilbert Gapay, chief of the Armed Forces of the Philippines, said the military retrieved 39 bodies and marked 22 missing.

The military also logged 50 injured while cops reported a lower count of 12.

Amid these disparate figures, presidential spokesman Harry Roque affirmed that the DILG’s figures were LGU-verified.

While a total of 345, 119 individuals — or 102,806 families — currently in evacuation centers by the DILG’s count, Año said this may not paint the full picture of those displaced by the Ulysses as others may have chosen to take shelter elsewhere.

“What we have validated right now are the 14 deaths and three missing. The reported recovery of cadavers, we still have to validate that,” Año said in Filipino.

“The figures could be higher….as these are based on evacuation centers. There are the individuals evacuated by our [local government units] but others did not go to evacuation centers but to their relatives instead,” he earlier said.

“Our LGUs always carried out their mandate in saving the lives and ensuring safety of their constituents,” Año said.

Leave it to the LGUs?

On Thursday morning, as the continued dumping of rains submberged thousands of houses in Marikina City, its mayor Marcy Teodoro appealed for air rescue and more motorized boats to augment the 50 it had already deployed, seeking help beyond the national government to address the dire situation.

Later the same day, President Rodrigo Duterte during an address to the public renewed his call on LGUs and concerned agencies “to ensure that the well-being and safety of our people remain the top priority.”

Last week, Duterte lashed out at critics who noted his absence as the strongest storm of the year, Super Typhoon Rolly, displaced millions and left 20 Filipinos dead.

OCD Assistant Secretary Casiano Monilla during a virtual briefing earlier in the day insisted that the government was not caught “flat footed” by Ulysses and said residents had not heeded warnings.

“Sometimes, our local officials make the rounds but our countrymen do not comply right away. We rely more on what we feel, on the prevailing situation that we feel, rather than the advice given by PAGASA,” Monilla said in Filipino during a virtual briefing.

On Friday morning, Malabon City Mayor Antolin Oreta, who had to evacuate some 1,100 of his own constituents, explained the reluctance of some families to evacuate amid calamities.

“Because it is understandable, there are families, they know that if they have a second or third source and the water is still far away, they will not really leave. Because maybe when they leave, they will be robbed, their clothes will be lost,” he said in Filipino. — Bella Perez-Rubio