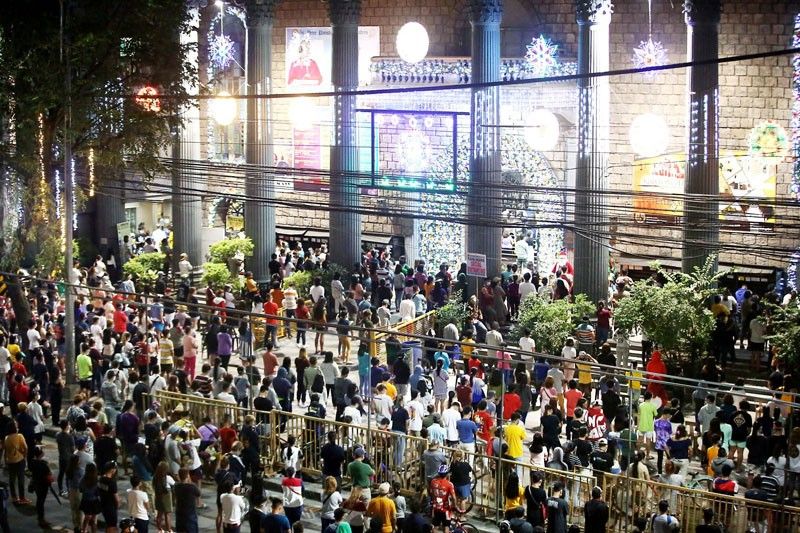 MANILA, Philippines — Filipino Catholics flocked to the first of the nine-day pre-dawn masses or Simbang Gabi yesterday despite the threat of COVID-19 – an act described by the officials of the Catholic Bishops’ Conference of the Philippines (CBCP) as a gift of hope.

CBCP vice president and Caloocan Bishop Pablo Virgilio David said the first Simbang Gabi brought hope to the Catholic faithful, especially to those suffering from the coronavirus disease and those who were forced to stay at home because of health restrictions.

“On the first day of our Misa de Aguinaldo, we focus on the gift of hope. It’s timely especially for the present crisis we’re going through due to the COVID-19 pandemic,” David said in his homily.

The gift of hope, he said, was reenacted through the lighting of the first of four candles placed atop the crown made of cypress leaves.

“So brothers and sisters, if we receive the gift of hope from Christ, this means that we should also share this gift with those who’ve lost hope in life – that is our mission as Christians,” he said in Filipino.

He said that sharing of hope can be done either through a simple text message or a video call now that people are strictly prohibited from mingling because of the coronavirus.

Cubao Bishop Honesto Ongtioco has also expressed optimism, saying that the number of faithful who trooped to local churches and at the Archdiocese of Cubao for the morning mass only showed that the people are hoping for the end of the pandemic.

“It was very good people expressed their love for some important tradition that helps us prepare for Christmas,” Ongtioco said.

Caceres Archbishop Rolando Tirona said he was also delighted “to see the usual living faith of the Bicolanos” as he emphasized that their desire to attend mass is what matters more than the number of attendees.

Tirona also urged the faithful to imitate the Blessed Virgin Mary in her prayerful expectation, deep reflection or meditation and joyful proclamation of Christmas despite the natural and man-made disasters that happened this year.

“Many attended with social distancing in and outside the Cathedral. Very edifying. No COVID-19 can separate us from the love of God,” he said.

While there has been some positive response during the first pre-dawn mass, Manila apostolic administrator Bishop Broderick Pabillo noted that some churchgoers failed to comply with health protocols, including social distancing.

Pabillo admitted that they could not control the crowd outside the churches, but he emphasized that the faithful will soon follow the protocols.

Pabillo attributed this to what he described as a “learning curve.”

“We are still learning how to control the people, but in general the people are following instructions. We can control the people in the church premises, but we do not have the authority in the streets. But there are many places where the coordination with civil authorities is well done,” he said.

He said they cannot suspend the physical masses.

Meanwhile, the first night of the Simbang Gabi held across the country was generally peaceful and orderly, the Philippine National Police (PNP) said yesterday.

PNP chief Gen. Debold Sinas said there were no untoward incidents reported by all police regional offices in Catholic churches which could have marred the first of the nine-day traditional masses leading up to Christmas Day.

“Everything went well on Day 1, we expect it to be better on Day 2, and perhaps even perfectly in the rest of the nine days until Christmas and through the New Year,” Sinas said in a statement.

The country’s top cop said church officials and local government officials effectively enforced local ordinances and health and safety protocols such as maintaining the 30 percent capacity in places of worship and observance of physical distancing protocols to avoid contracting COVID-19.

Sinas on Sunday met with officials of the Quiapo Church in Manila and Baclaran Church in Parañaque where they discussed measures on how to improve the security and public safety operations for church activities during the holiday season. – Emmanuel Tupas