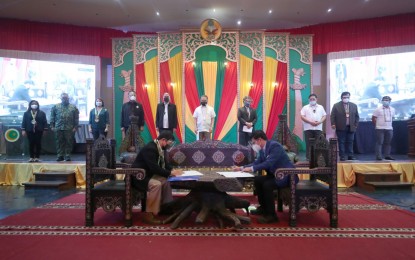 ADMINISTRATIVE TRANSFER. DILG Secretary Eduardo Año (left), together with MILG-BARMM Minister Naguib Sinarimbo (right), inks documents officially handing over Cotabato City to the administrative control of BARMM during ceremonies held Tuesday afternoon at the BARMM center in the city. Also transferred to the BARMM control are the North Cotabato 63 villages, which opted to join the new region following a plebiscite in 2019. (Photo courtesy of BPI-BARMM)

COTABATO CITY–This city is now an integral part of the Bangsamoro Autonomous Region in Muslim Mindanao.

This came after the Department of the Interior and Local Government Secretary Eduardo Año, together with Department of National Defense Secretary Delfin Lorenzana, led here Tuesday afternoon the city’s administrative control from Region 12 to the BARMM.

“The city is now under BARMM. Its project and programs now conform with that of BARMM,” Año said during a press briefing.

Also turned over to BARMM’s control were the 63 villages in six towns of North Cotabato and the DILG field office in the city.

Año assured the national government would remain supportive of the fledging region’s transition phase that was formed following the two-part plebiscite held in January and February of 2019.

Apart from the old Autonomous Region in Muslim Mindanao set-up, the 63 North Cotabato villages that voted to become part of the new region in a plebiscite now form part of the expanded BARMM.

The BARMM is the product of the comprehensive peace agreement between the national government and the Moro Islamic Liberation Front aimed at ending the decades-old Moro struggle for self-determination in the south.

“As of now, we have to implement the law,” Lorenzana said, referring to the Bangsamoro Organic Law (BOL) that created the new region.

Minster Naguib Sinarimbo of the Ministry of the Interior and Local Government (MILG) said under the BOL, government-line agencies in the city should be devolved to the BARMM as part of the region’s transition phase.

He said the BARMM has long prepared for programs relating to the transfer of the government offices in the city to the region.

“No one will be left out. We will be much stronger in the BARMM as a united people,” Sinarimbo said.

The BARMM official said the city will remain an independent component of BARMM, with its internal revenue allotment (IRA) still under the national government’s management.

However, he said the city’s IRA compliance with basic requirements for utilization will now be under the supervision of MILG-BARMM. (PNA)