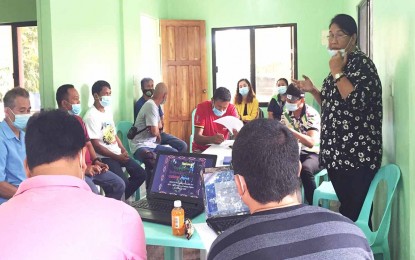 PREPARATIONS. Las Nieves, Agusan del Norte Mayor Avelina Rosales (standing, right) presides the meeting of stakeholders and farmer leaders in preparation for the start of the construction of the PHP19-million coffee processing center on the first quarter of 2021. The center is seen to boost coffee bean production and trade in the town and the nearby areas in the province. (Photo grab from Agusan UP Facebook Page)

BUTUAN CITY – The local government unit (LGU) of Las Nieves town in Agusan del Norte has welcomed the establishment of the PHP19-million coffee processing center, which will start construction in the first quarter of next year.

The “Green Coffee Bean Production and Marketing” is a project jointly funded by the World Bank (WB), the Provincial Government of Agusan del Norte, and Philippine Rural Development Project (PRDP) under the Department of Agriculture (DA) that aims to establish a modern, value chain-oriented and climate-resilient agriculture and fisheries sector.

Seen to increase the coffee bean production and trade in the town and the nearby areas in the province, the processing center will be established with the Casiklan Wheels Farmers Association Inc., as the partner organization.

Benjie Duque, an officer of the Provincial Agriculture Office (PAO) in Agusan del Norte, said the project aims to increase the coffee trade in the town and further improve the production and marketing of green coffee beans.

“Through this project, we target to produce and sell 300 metric tons of green coffee beans annually. This will have a huge impact on the coffee growers as we aim for a 5-percent increase in their livelihood income,” Duque said Friday.

“The Robusta produced by the coffee growers within the cluster area will be sold to a focus group, which is the CAWFAI (Casiklan Wheels Farmers Association, Inc.). The CAWFAI will then serve as the consolidator and will be the one to market the coffee beans to various processors in Cagayan de Oro and Butuan City with whom they have partnered through marketing agreement,” Pasquito told the Philippine News Agency on Friday.

The project involves constructing 60 units of all-weather driers, which will be distributed to production areas in Barangay Casiklan, Durian, Ibuan, Balungagan, and Lawan-lawan.

Also included in the budget are howling trucks to be used for buying and selling of coffee beans and a milling machine.

CAWFAI, meanwhile, contributed to the land where the warehouse will be constructed as their equity.

“Once the facilities will be ready to use, the farmers will also undergo seminars, training, and capacity building on coffee production, processing, product development, and marketing to develop their farm enterprise and have profitable operations,” Pasquito said.

Las Nieves is one of the most suitable towns in terms of coffee production, specifically the Robusta variety.

During the 1st Caraga Cupping Competition in Butuan City last 2018, the CAWFAI won the competition and got the highest-grade Robusta scoring of 82.1. (PNA)