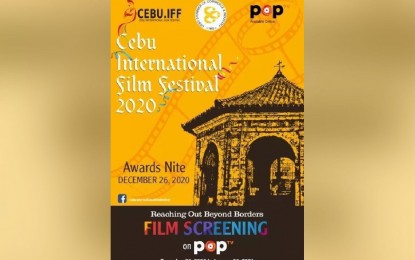 “As the local community celebrates the Cebu International Film Festival (Cebu.IFF) 2020, it is but fitting to remember that this is an effective medium for fostering collaboration and creating valuable partnerships, locally and internationally,” Cebu City Mayor Edgardo Labella said on Monday.

Labella said the Cebu.IFF, now in its 9th year, has become a platform to back the development of the film industry in the province.

“Through the Cebu.IFF, we have a platform for showcasing and developing Philippine-produced narrative, documentary, and animated films,” the mayor said.

Aside from supporting the film industry, the Cebu.IFF has also helped local filmmakers increase their knowledge of their craft.

“I have a high regard for the film industry especially since my late father Eugenio was a veteran director throughout the first golden age of Cebuano movies,” Labella said.

Initiatives like the Cebu.IFF “showcase Cebuano creativity to the world and help to educate Cebu’s youth on patronizing and recognizing local films”, he added.

Last Friday, the Cebu.IFF held a virtual screening of the multi-awarded film “I am Israel”, a story of a journey through the Land of the Bible and introduces viewers to Jewish men and women whose very lives are a testimony to the promises of God.

The Cebu.IFF has partnered with POPTV, a new video-on-demand streaming platform, this December as the annual award-giving body goes online for the first time.

With this partnership, POPTV aims to bring Cebu.IFF’s exhibition of local and international titles to a broader audience nationwide and at the same time, stay true to its commitment to bringing the best Filipino entertainment to Filipinos.

The Cebu.IFF will be available on POPTV for two weeks beginning Dec. 19. (PNA)