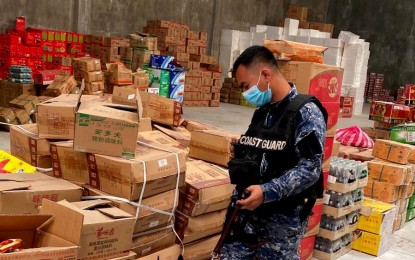 MANILA – The Bureau of Customs (BOC) on Friday reported the seizure of counterfeit products worth PHP15 million in a private warehouse in Meycauayan, Bulacan.

In a statement, MICP District Collector Romeo Allan Rosales said the group discovered suspected fake products such as bags and other food items stored inside the warehouse.

Also, the group found out that the facility was storing imported alcoholic beverages.

The warehouse has been sealed and placed under customs custody as further inventory and investigation conducted.

He also discouraged the public from patronizing fake goods especially those which are sold for human consumption such as food items and body products, as these may have harmful effects on the body.

The MICP, the country’s largest port, through its intelligence and enforcement team, expressed commitment to curbing smuggling and the entry of counterfeit goods in line with the Commissioner’s drive to strengthen the country’s border protection. (PNA)