Ballantine’s may not be the first brand that comes to Filipino minds when they think “blended Scotch whisky,” but it’s a name with many famous followers through its century-long history. Fans like Brigitte Bardot, Audrey Hepburn and JFK, who reportedly requested supplies of “Poland water and Ballantine’s Scotch” be kept in store when he went riding on his family ranch.

But the folks bringing Ballantine’s Finest to the Philippines, including managing director John O’Sullivan, brand manager Mark Arezza and whisky expert Hamish Houliston, were not holding Thursday’s Zoom tasting session to glorify its past; they want to bring this “entry-level” whisky to more local palates. 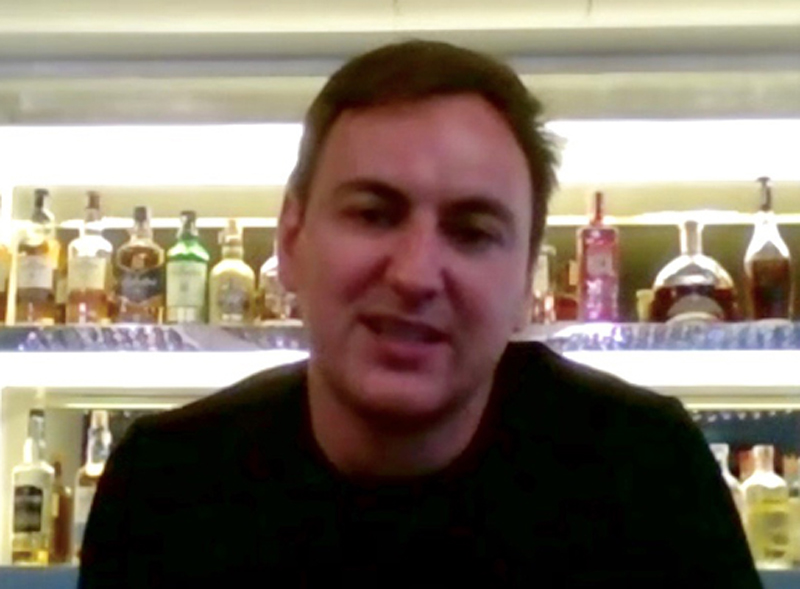 Ballantine’s whisky expert Hamish Houliston fills us in on the Finest.

Let’s lay in a few facts as well: with a nearly 200-year history, Ballantine’s is the No. 1 blended whisky in Europe, and No. 2 in the world. It’s even No. 1 in Korea, land of K-Pop and trendy male grooming. As I mentioned to our Zoom hosts after taking my first sip, “the Philippines has some catching up to do.”

More history: George Ballantine, as early as 1827, switched from his lucrative trade in blended wines and teas to even more lucrative blended whiskies. He also pioneered the whisky aging process (all blends are barrel-aged a minimum three years). Its signature Ballantine’s Finest arrived in 1910, blending some 40 malts and grains with key distilleries in Glenburgie, Miltonduff and Glentauchers.

• Ballantine’s Finest’s distinctive rectangular bottle shape was designed around the time of US Prohibition in the early 1930s — when liquor sales were banned across the country —because it was “easier to bring into the United States in suitcases.” Less rolling around, we presume, plus you could carry around more bottles.

• Ballantine’s also employed a unique practice of using geese to guard its supplies back in the day — even more effective than guard dogs, we hear — and the geese have become a kind of mascot, even invited to visit the Playboy Mansion (perhaps to guard the Playmates).

• Remarkably, the position of master blender at Ballantine’s is so rare and refined, they’ve only had five of them — fewer than the number of people who’ve landed on the Moon — since they first began distilling.

Houliston, who spent several years in the Philippines way back when, was our tasting guide for this home session. He noted that Ballantine’s Finest sticks to a master blend formula that has stood the test of time. We went through the usual paces of removing the cap, pouring a generous pour into our cairns (those who had one) or the large cocktail glasses provided in our “home kits” (where better to drink responsibly?) which also included a generous supply of Ballantine’s Finest, a lime, a can of Coca-Cola, and some nice merch (Ballantine’s hoodie and T-shirt).

Famous fans of the brand

Houliston had us nose the pour, noting its sweet and smooth taste with “honey aromas, subtle tones of milk chocolate, red apple, and vanilla.” Other aroma notes were highlighted: “That particular Speyside (smoky, peaty) quality, floral, fruity, almost a scent of cut grass.” He suggested just a drop or so of water to bring out and open up “cakey” flavors.

I recommend that splash of water as well. It balances the whisky and brings out more subtle flavors. There’s a fresh, floral medium/long finish, and a pleasant rounded glow. (Perhaps that was just me with the glow.)

We moved on to a cocktail version, the Finest and Cola, which starts with a tall glass packed with ice; liberally pour over Ballantine’s and top it off with cola and a squeeze of lime or lemon.

Personally, I’m happy enough with a generous cairn of whisky with just a drop of water, but the cocktail recipe actually brings up the reality of these ongoing Zoom events: whisky makers worldwide (not to mention Filipinos en masse) are eager to get back to a “normal” reality in which people drink in bars, order cocktails throughout the night, and party, party, party (responsibly, of course). Every step of the libations food chain has been affected by lockdown, from retailers to bars, and although Ballantine’s is generally happy with the uptick in liquor sales during this “Ballantine’s really haven’t got the attention that they probably should have got,” says O’Sullivan of this relatively new addition to the Pernod Ricard brand catalogue. “I believe this day’s event was our first ever virtual tasting of Ballantine’s in the Philippines and maybe, as far as I know, our first ever tasting in the Philippines.”

So there’s plenty of room to grow. “We definitely have a strong position to start from,” he continues. “It’s a brand with great heritage that goes back to the 1800s, it’s got great quality credentials, it wins awards every year. It’s got a wide portfolio of blended scotches and also single malts. So it appeals to different tastes and all sorts of different budgets,”

And Ballantine’s very reasonable price points (from P599 to about P10,000 for 12-, 15- and 40-year whiskies) make it easy to sample and explore more. As O’Sullivan points out, “It’s a good time to be buying whiskey because you get some great value for your money. And Ballantine’s hits that sweet spot as well.”